My hands trembled, sweaty palms, dry mouth. I had been to church and was convicted in my heart of a wrong I had committed. It was my own stupid mistake, my own sin.

I had to clear my conscience, to confess my theft. I thought it would be easy. Just go in, confess my wrong, make financial restitution and, hopefully, walk out.

I went unannounced and asked to see the only person I still knew in the school administration. Now, seven years after graduating from high school, I sat in the Assistant Superintendent’s office. Mr. Peterson, as always, was very kind and gracious. He asked about education, family and career.

After the chit chat formalities, he asked what brought me by. I had it all worked out in my head what I was going to say, just the facts, nothing but the facts. I only got out the first few words of my canned speech… “Mr. Peterson, I am a believer in Christ and I need to–“.

Mr. Peterson was surprised, assured me it was OK, and quickly got up to close his office door for privacy.

Over the next few minutes, in broken, mumbled sentences, with tears flowing and complete shame, I confessed to Mr. Peterson what I did. I confessed I was a thief. I confessed I was wrong, terribly wrong, and that as a Believer, I had to make my wrong right. Sometime during those minutes, which felt like an eternity, I held out a personal check made payable to Angleton High School, with restitution scribbled in the memo section.

From behind his huge oak desk, Mr. Peterson leaned toward me the whole time. As I managed to wipe away tears and blow snot in the Kleenex he had handed me, he leaned back and began rubbing his chin in contemplation.  His surprised eyes turned soft, understanding, almost pleased.

Suddenly he got up and left the room. I wondered if he was calling campus security to file charges. He came back in just as quickly a minute later.

His secretary walked in a couple of minutes later and handed him a piece of paper. Out of the corner of my eye, I could see her staring at me as she walked out.

Mr. Peterson sat motionless staring at the paper. He looked up and asked if there was anything else we needed to discuss. I ran the Kleenex across my nose and answered, “No sir. That’s it.”

Mr Peterson was deeply serious when he spoke. He would’ve been totally justified blowing me out of the water, telling me I was a knucklehead, a worthless thief, that I didn’t deserve to be trusted, ever. He didn’t. He told me he knew it was a hard thing to come and confess a wrong. He thanked me for coming to see him. He encouraged me. He spoke words of life into me.

Honestly, I don’t remember his exact words. I do remember, instead, how in those moments I sat like a small boy at the feet of a wise sage. His words began to heal a nasty, internal sore in my heart that in most ways, I didn’t even know I had.

Mr. Peterson told me I was clear with Angleton High School, and with a genuine smile handed me the piece of paper. It was receipt from the school district that said, “Full restitution for stolen items”.

Outside the administration building, I felt such relief. My steps felt so light, so easy leaving that day. I had no idea how much that wrong had weighed me down, at least, until I confessed it.

I’m not proud of what I did, for that act of theft forever makes me a thief.  I have never, knowingly, taken or stolen anything in my adult life.  Shoot, I consciously return ballpoint pens from work that end up in my pocket at the end of the day.  If you can’t trust someone with a ballpoint pen, you can’t trust them with anything. 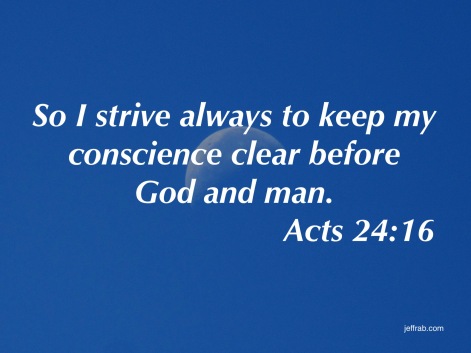 Yet doing right is not why I am free. I am free because of unmerited grace, kindness and forgiveness.  My wrongs were nailed to a cross in the death of Christ, who returned to life three days later.  I believe, I confess, that Jesus paid my debt through His unmerited grace.  Some may call that a crutch, crazy, maybe even another rationalization, but freedom of spirit through confession and forgiveness is real. Very, very real.

It doesn’t take away the shame I feel for what I did as I write about this experience 29 years later.  Even posting this makes me nervous.  But your mistakes and wrongs don’t define who you are if, IF you confess them and give them to the One who took them to a rugged cross.  His forgiveness, His grace turns trembling hands and sweaty palms into open hands with palms raised toward heaven.

I am not held captive by a guilty conscience for I am redeemed, restored, whole.  As far as the east is from the west, I am forgiven for being a thief.  Forgiven by God….God, and Mr. Peterson.

9 thoughts on “I Am A Forgiven Thief”