It’s official! The old 96 GMC pickup has been driven solo by all eight of my kids!

My Dad would be proud! Or maybe, just maybe, the floors of heaven opened up for just a minute so he could see Jessica, the last of my Mohicans, drive the truck he bought new before he died. In that case, it’s safe to say he IS proud!

It’s a wonder the ole white beast truck has survived at all! Clocking in at just under 200,000 miles, it has seen better days, but it’s still a solid truck. It’s just good to have solid metal surrounding a teenage driver, ya know? Even with no radio, air conditioning, fan blower and a tailgate that won’t open without a pair of pliers, the old fellow just putts along. And besides, who needs air conditioning in Texas anyway??

An old pickup like that needs to be babied and pampered. It’s no wonder the old guy is sick!  It has the equivalent of mechanical dermatitis on the paint, arthritis in the suspension, bursitis in the transmission, bronchitis in the air intake, gastritis in the fuel system and flatulence in the exhaust!

Here’s another good thing about the old, sickly white truck, never in your wildest day would you ever dream about leaving rubber around town by peeling out in it. No way.  In fact, you have to be patient to even get going when the light turns green. It’s like the start of a 100-yard dash at the nursing home Olympics. It’ll get going, eventually. It just takes a while!

Four sons and four daughters, minus Jessica….at least yet….have their own special “mark” on that old truck. The boys made marks based on what the truck could do, like getting it stuck in mud at the river, or dings in the bumper from trying to do things that I probably don’t know about, nor want to know.

On the other hand, the girls made their mark by where the truck could fit. Shawnna put a long scratch from the passenger door to the rear quarter panel and left the side view mirror hanging by wires. It’s probably a big surprise to you too, but apparently those little sign thingies at Sonic, well, those thingies don’t move out of the way when you’re backing up. Who knew?

Shelby had her own dings in the body and knocked down a little brick wall at the neighbor’s when backing out. There’s more dings in the door sides due to car doors hitting from Katie, and now Jessica, the newly licensed driver, is in command of the steering wheel. She hasn’t done anything, yet, to the old truck, and you know, maybe she won’t. Just to be on the safe side though, I may get her to take a hammer and whack the hood several times just to get it over with!

On the inside, each boy added their own variations of stains to the floorboard carpet, mainly from tracking in mud, grease and oil. The girls all added carpet stains too, except from coffee, cokes and gum.

Thank goodness it’s just a bucket of nuts and bolts! If that truck had feelings, it would be diagnosed as a neurotic victim of abuse suffering with panic attacks and PTSD. No wait! That’s my diagnosis. Never mind.

It’s all good though, and honestly, it all combines to give the old truck character! Plus, it has multiple cracks in the windshield, a broken door handle and sometimes the glove box falls out for no reason. There’s enough shakes, rattles and rolls to dislodge your dentures!

Even so, all eight kids cut their teeth in that old pickup truck when they turned 16! My niece will turn 16 years old in 4 1/2 years. Maybe she can start out driving the old clunker too if, and it’s a big if, IF the truck survives! By that time, probably the only thing holding it together will be rust and bondo. 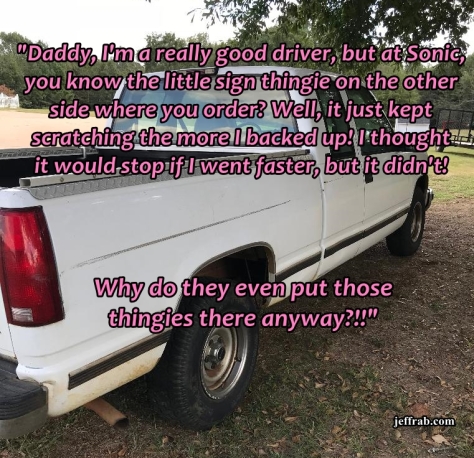 Some people love old furniture, like a coffee table that bears all the marks, dings and damages their kids gave it over the years. They can show you teeth marks their toddler children made by biting the corners, and proudly display the place where years ago the permanent markers bled through the coloring book pages their kids were coloring.

Someone once said, “Don’t ruin a million dollar kid over a $300 piece of furniture”. Certainly kids must learn to respect property, but the point is well advised. Let ‘em live. Let ‘em learn.

Looking back from the down slope of time, I wish the old truck had toddler teeth marks in it. It would be that much better! I also wish it would last forever, but one day in the near future, it will be time to part with the old fella.

I’ll miss that old truck, but not nearly as much as I miss the kids and years gone by when each one “marked” it in their own unique way…and then not too terribly long after marking it, flew away from the nest…

So, here’s a hammer, Jessica. Swing away!

4 thoughts on “The Old White Truck”