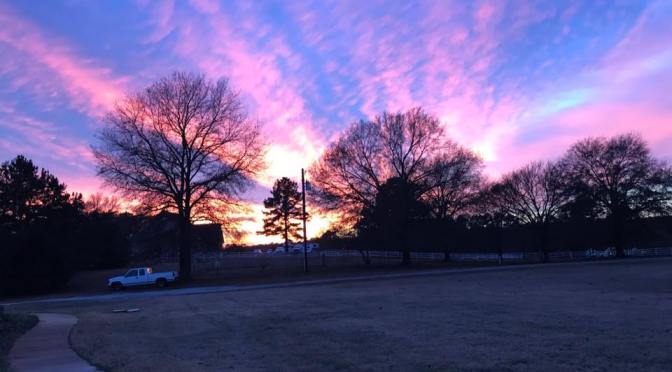 The alarm goes off at 5:05 AM. It made enough noise and took the perfect amount of time to rouse from a deep sleep. A pull of the blanket over the head won’t make sleep return. Besides, a nagging conscience says get up and exercise.

By 5:25 AM I’m hitting the road. At the same time the day before, I walked with my daughter, Jessica, while she walked the neighbor’s dog.

Today though, the dog will be walked in the afternoon. And besides, today Jessica wouldn’t wake except for a five-alarm fire and Janet’s allergies would go ballistic in the midst of the pine pollen blizzard.

The first steps are always the hardest, especially walking by yourself. It’s a battle of wills as the body objects to the mind’s intentions. After a quarter-mile, the body submits. After a mile, body and mind are in harmony.

Our long neighborhood road is a favorite of walkers, bike riders and joggers for both the locals and students from the university. Street lights line the wide street pathway. Sidewalks guide the way.

I turn south and a couple of college girls wearing flashing lights on their belts cross on the other side of the street. It’s impressive. Over a mile from the college and they are running north at a steady speed, but talking in overdrive. 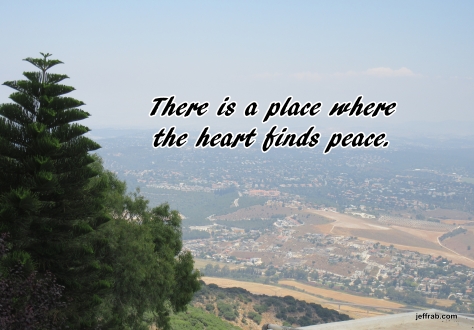 A car comes from a side road and I flip on my little flashlight to be seen. They turn and go the other anyway. The SUV was new, but the engine sounded so obtrusive, harsh really, to the still and quiet of the morning air. The car fades as it speeds to whatever destination there is at 5:30 AM.

The air is calm, and the almost full moon flickers as it plays peek-a-boo with rain clouds. Far away is a flash of light in the heavens, but the thunder from lightning never arrives. Maybe God was just taking a flash picture of something He really liked right then.

There are trees, everywhere, trees. One solitary bird chirps up on a branch in the dark.  A little farther down another bird begins to chirp the same message, as if it was a slow-moving winged telegraph. A hundred more steps and yet another bird starts to chirp.

A mile and half from the start button, I reach a turnaround point. I glance at the college and wonder what the University police officer is doing just sitting in his parked car with headlights shining in an empty lot.

Starting back north, an ROTC squad begins their daily 6:00 AM exercise regimen. They are near, but nowhere in sight. The rhythm and sound from the future heroes is mesmerizing. The leader barks off the cadence. The unit sounds off in unity.

There is chirping in most trees now. A few song birds are awake too, and they begin singing an a cappella chorus of a feathered choir. 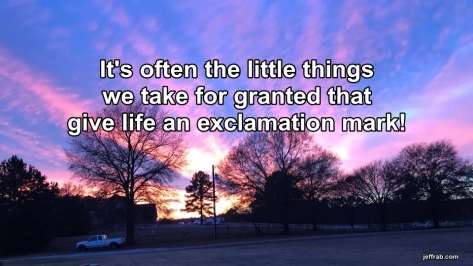 In the east, the sky turns lighter gray as the shadow side of the earth turns toward the light.

I hear my own steps and realize a tennis shoe cadence.

Four or five more cars turn on the street. Each move in a self-lit, steady determination to be somewhere other than there.

A few minutes later, the gentle quiet is gone. Nature is alive in the trees with chirping, singing birds.

A backyard dog half-heartedly barks at a man jogging with a dog on the other side of the street. The man glances at me and waves an acknowledgement. I respond in kind. Thankfully, there are no words.

A street lamp in an open area just ahead automatically goes dark as the sky moves to an even lighter gray.

The birds are so loud now as they catch up on the morning gossip of all that has happened in the bird world since sunset.

As nature’s alarm clocks, the birds keep getting louder, and louder, and will not stand for late risers among any animals. There are things to do, places to fly, worms to catch.

One hour and 3 miles later, both mind and body are in sync. Life and peace take turns stepping back up the driveway where the start button becomes the stop button.

A final glance to the skies. Rain clouds are everywhere. In the east though, there are dark blue clouds filtering new morning light. It’s supposed to rain today, a lot. But, it’s OK. It’s good. It’s all good!