Some of the best characters are real live people….and so it was at lunch time. While eating lunch in a grocery store “deli”, an old gentleman was sitting at a table staring down the aisles. He looked tired, but content.

We exchanged head nods when I sat at the table near him, which in body language means, “I see you. I acknowledge you. I’m going sit here, but we won’t talk and ruin this quiet.”

Two minutes later, a heavy set man in his late 50’s walked by and spoke to the elderly gentleman who he obviously knew.

“Hey! You gettin’ yourself a lunch here?”

The old man responded, “No. My wife’s shopping so I’m waiting.”

“Well”, the big man said, “I’s gonna get me a lunch, but the line’s long right now. I’m not real hungry anyway. I microwaved a chicken pot pie for breakfast. You’re lookin’ like you’re feelin’ better”.

“Yep. Doctor says I can start fishing again in a couple of weeks”.

With that, a fish story ensued. The heavy set man sat down slowly, cautiously bracing himself on the table, like someone was going to jerk the chair out from under him at the last second. The big man immediately reminded me of someone, but couldn’t place who.

He was wearing a pair of tight denim overalls with a white t-shirt. The buttons on both hips were unbuttoned so he could fit in them. His overalls were high waters and exposed his dirty white socks and gray tennis shoes. If he hadn’t sat down slow, he could’ve split his britches from end zone to end zone. No one wanted to see the end zone.

When he finally settled down, I put my glasses back on. I was afraid if he sneezed one of the metal buttons on his overall straps would bust loose, fly over and put someone’s eye out. His old fashioned crew cut topped off what some might describe as the Pillsbury Doughboy dressed in an undersized leotard.

The big man spoke in a slow, measured voice and just speaking seemed to take all the energy he could muster. It was an uncanny. Even his voice sounded familiar. Then it hit me like a flying overall button in a blast from the past! Hee Haw! Jr. Samples! Could’ve been his twin!

Jr. listened to the older gentleman talk a minute, and then Jr. said he’d only been fishing two or three times the last year. “My boat bottom hadn’t seen lake water in ore’ two years.” I knew what he meant, but somehow it was wrong to say it that way!

Jr. spoke so slow you wanted to pull the words right out of his mouth. “I used to be”, he belched quietly while hitting himself in the gut with his fist, “I used to be quite the fisherman, but not so much anymore”.

His own words tell it best, so here goes:

“I ain’t been boat fishin’ in two years, really two and a half cause it was winter last time I was out in my flat bottom boat. I’s down yonder, down there at Shirley Creek Marina. Well, I’d put out some soured corn and was just tearing the heck out of da catfish. Anyways, I got hung up on an ole stump. I finagled my boat up by the stump, but when I pulled real hard on my line, well, I fell right over in the water. It was cold too! I mean, it was COLD!!”

He went on. “I guess it’s a good thing it was cold that day, cause ‘fore I fell out the boat, I’d put my life jacket on to get a little warmer. That life jacket kept me from drownin’. It sure enough did! I’s able to grab the side of my boat, but ever time I tried to pull myself in, it’d turn on edge. I’s afraid I’s just gonna turn the whole thing plum over!”

Now I was interested, so I chewed slower and kept eavesdropping. 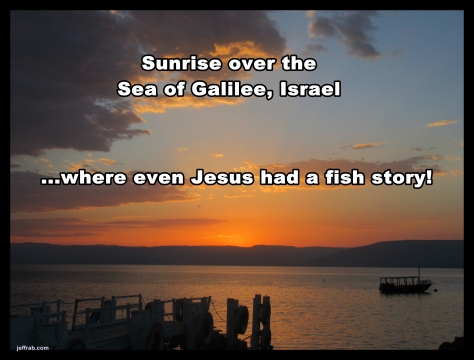 “There’s a guy. I’d seen him out there before, and he was fishing close by in a bass boat. I know he had to see me fall in, but ya know that guy just cranked up his bass boat and went on in to the Marina! I guess he didn’t care if I drowned or not! I don’t know who he is, but I don’t like him none for that!”

“Well, I tried and tried to get back in the boat. I just couldn’t pull myself in. I’s really gettin’ cold in that water, and finally, an ole boy checking trot lines pulled in about a hundred yards away. I started hollering and he came right on over.”

The big man wasn’t talking fast. If anything, Jr. Samples was talking slower the farther he got into his story with a full fledge country twang. He stopped, like he was thinking something through, and went back to the bass boat.

“Ya know, I wasn’t more than 40 steps from that bass boat! There ain’t no way that guy couldn’t have not seen me! No way! Thank Gawd dat other fella come over and helped me! He tried to get me in his boat, but I’s just too tired and cold by then, so he tied off my boat to his and towed me in. I just held on to the side handles on the back of my boat. Heck! He drug me in like I’s a dang blasted water skier!”

The picture in my mind looked more like a whaling ship with a catch, but that was just my take on it.

“I finally drug bottom up by the shore and walked on out. You know that ole boy helped me load up my boat and everything! I’d sure like to give that guy in the bass boat a piece of my mind though!”

I wondered how long would it take Jr. to give the guy a piece of his mind?

“My family won’t let me go out on the lake no more by myself. I told ‘em though!” He said with great emphasis, although slowly, he said, “I told ‘em I’d go out fishin’ any dern well time I wanted to!! I hadn’t gone out since then though, cause, well, I just hadn’t wanted to!”

The elderly man’s wife was slowly walking up pushing a buggy. The elderly gentleman looked relieved and saw a chance to free himself.  He stood, shook Jr.’s hand and said, “Well, it was good to see ya!”, and as if he hadn’t paid attention to anything Jr. had just told him he said, “Good luck with your fishin’!”

Jr. said he was going eat lunch from the deli, then buy himself some more pot pies. He used the little table top to help push himself up, which made me wince a little, just in case a button popped.

So the next time you happen to be at the lake around Shirley Creek Marina, look for a Jr. Samples looking man in a flat bottom boat wearing an undersized life jacket. Look closely though. He probably won’t be in his boat long! In the end though, he may be the best entertainment of the day!!