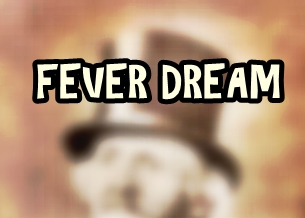 Some of the grandsons were staying with us this weekend and one of them came down with a 103-degree temperature.  It was the flu, type A.

I hate fever!  It does strange things to me. Like a knife, fever brings an impending terror to my mind.

I’ve had the exact same fever dream I’ve had since childhood. It resurrects itself, poking bony fingers up from the cemetery of good health to snag and pull at all sense of well-being.

Fever brings a deep physical and emotional need to fall asleep, a relief really, instead of buried and shivering under mounds of blankets.

Yet once the eyes close and the mind drifts into never land, terror creeps out of the memory grave.

It’s at a house I’ve never been to, yet one I know every inch of so well. In dark fever dreams, I’ve wandered the rooms, sat on the furniture, run through the halls. The house has secrets, hidden stairs, dark corners.

It’s not real, but in feverish sleep, the mind feels like powerlessness is ordinary, terror is normal.   The dream always returns with fever, like a restrained evil that has been set free to roam wild.

The house sits at the end of a long cul-de-sac on a normal looking lot. The menacing two-story frame house doesn’t look so big from the outside, but with fever in control and sleep in the eyes, the front door slams shut as soon as a I walk in.

A mirky sense of dread grabs any remaining spongy courage and squeezes it dry.  The rooms are all the same, but always changing, always moving. Furthermore, the furnishings always move around.

Only the large banisters of stairs to the second floor remain in the same place, but with each step through each room, the house grows, bigger, more ominous, feeling as if a starving cat is about to devour a tiny mouse.

Even in sleep I realize I have fever, but I can’t wake.  The horrible feeling engulfs me, wrapping its icy fingers around me to pull me down, down where I’ll never awake.

I never intend it, but I’m always drawn, enticed as you will, upstairs.  The second story begins expanding with more stairs, more floors, each darker than the ones before.

Somewhere in the ever-moving framework, there is a large auditorium.  It makes no logical sense, but the auditorium keeps opening up, again and again. I hate it.

A tall, Abraham Lincoln looking man wearing a top hat is on stage.  The expressionless, diaphanous man stares, not at me, but through me.  He is present, but not alive, there, but not.

I shrink from his vision, trying to escape as panic makes each step more uncertain.  But walking quickly, and for sure running, moves you deeper into the belly as you go higher in the house.

Suddenly the auditorium reemerges, then again, and again.  The top hat man never moves, but he always gets closer.  It’s like being a tiny bug in the middle of an intricate spiderweb, tangled, and the more you move, the faster the spider comes in for the kill.

I dash to the right and escape the room, but find myself on the left of the house with a hidden crosswalk back down to the stairs.  No sooner than I start across, the floor gives way crashing below.  I hold on the rails for dear life, dangling, grappling to jump to the floor.

I manage to drop down to the stairs and run down the curved stairs to the front door. Just before I reach it, the house shifts again with the only escape now the back door.

The expressionless top hat man leers at me from the top of the stairs. I run, as fast as I can I run, but it’s in slow motion, as if my feet and time are forever in concrete.

Finally, I burst free through the back door, and for a moment, a relief replaces fearful dread.

Only a few feet of the backyard now exists. A freshwater lake that looks like salty ocean tides flows back and forth.

The water whispers, calls, beckoning from beyond to wander deep into the waves to hide from the evil of the dreadful house.

The water is warm, loose, free. It feels safe, but only for a moment.

It recedes quickly.  I hurry to catch it. A large wave tumbles me, head over heels I roll in a watery prison.

Up is down. Down is up. Churning water increasingly pulls me deeper as if ill-omened water chains pull me down.

I can’t breathe, yet I know not to open my eyes, fearful to confirm what I already know.  I swing helplessly at the hands of ominous beings, until upside down my hand scrapes sand.

I struggle, thrashing to stand, fighting dark powers, shaking in waist deep in water.  Determined, I push back, shoving my way inch by inch back out of the watery fingers to cling in its angry grip.

Somewhere between the house and water, I collapse in exhaustion.

There’s nowhere to go, nowhere to hide, but I have to try. I slip into a tool shed by the house, but once again find myself at the foot of the stairs with the banisters up to the second floor.

All night the dream twirls. Always changing. Always the same.

I wake from dark sleep, hot, then shivering cold uncontrollably, too terrified to sleep, too exhausted to fight.

As long as the fever remains, the dream returns the second sleep ebbs in, gripping, grabbing, grasping. It loops, stuck on rewind with the play button held down until sometime, somehow, the fever breaks….

…and then the dream leaves.

All I can say is don’t walk in that door! Don’t step in that water! The fever will pull you in, and there, the man in the top hat waits.