It came alive!  Seeing the Valley of Elah in Israel a couple of weeks ago, the place where David slew Goliath, it made sense!  The valley was big, but not huge.  Much of the rich, fertile soil had just been tilled. On one side is a long hill with a continuous ridge, and on the other side, the same. 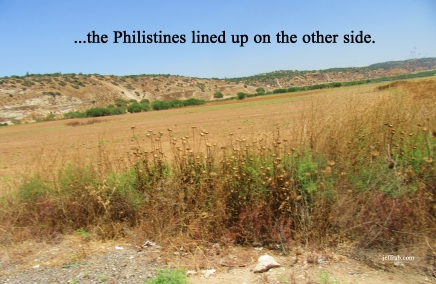 In the middle was where a battle between an enormous man and a small teenager took place.

Not only was Goliath a well armored, fighting machine, he was the top warrior for the Philistines.  Even by today’s standards, he was huge!

No one, not one, among the Israelites wanted a piece of Goliath.  Only David, a ruddy faced, small teenage boy who watched sheep, agreed to the fight Goliath down in the Valley of Elah.  King Saul tried to fix David up and dressed him in his own big, heavy armor.  It was like taking the helmet and pads of a professional football player and putting them on an eight-year-old Pee Wee football player.  The armor was too big, too heavy, too burdensome. The King’s armor just didn’t work.

David said, “Can’t haul, Saul”…or something like that, and stripped back down to his simple cloak that shepherds wore.

David committed to the life or death fight that day.  He went down the ridge and stopped at a brook to pick up five smooth stones.  From there, little, tiny David walked out against a huge, dominating Goliath.

Come to think about it, it’s kind of like the nation of Israel today against the rest of the world…

Back at the ranch, Goliath got ticked.  He sees what he considers a Howdy Doody come out to fight him.  His pride was no doubt hurt.  He thought, “How dare they! I am Goliath, the ultimate warrior champion!” Goliath angrily charged down the other ridge.

David stood his ground.  Somewhere in the middle of that valley, David let one, and only one, stone fly out of his sling.  That one stone landed right between Goliath’s eyes and knocked him out clean.  David walked to him, took Goliath’s own sword out of the sheath, and cut off his head.

Against all odds, against all bets, David slew Goliath!  It’s a great children’s story, a story for the ages, yet at the same time, it’s brutal. Totally, brutal. 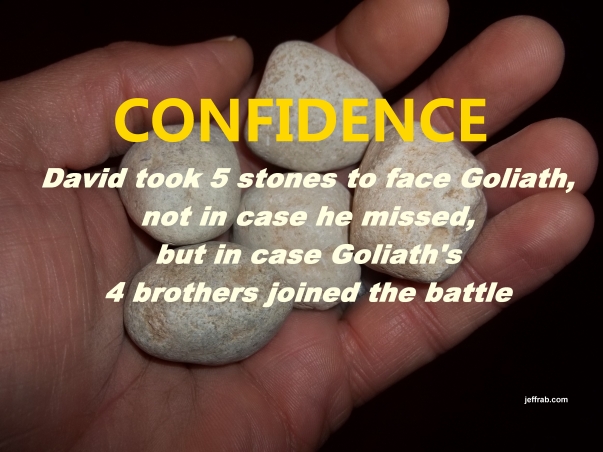 But you know, it’s not even the fights that bother most people. It’s the seemingly insurmountable size of the Goliaths.

Sometimes we lose the battle before we ever fight. Sometimes we try on the huge, burdensome armor, but just keep it on.  Let’s make it clear. Man’s armor is not how you win the battle!

It goes on and on, and man’s armor, man’s ways, are seldom the way of God!  In fact, a general rule is that if it feels like the “natural” thing to do, then it’s probably the wrong thing. It’s man’s armor.  On the other hand, if it’s exactly opposite of what seems “natural”, then it’s often God’s way.

Let that get a grip.

So go take off the armor. Put on a simple cloak of the Good Shepherd. Get your stones. Give the battle to the Lord. Face your Goliaths.

Nothing, nothing is too big for God.  Nothing is out of His range. Nothing is impossible when you give God the rock in your sling!