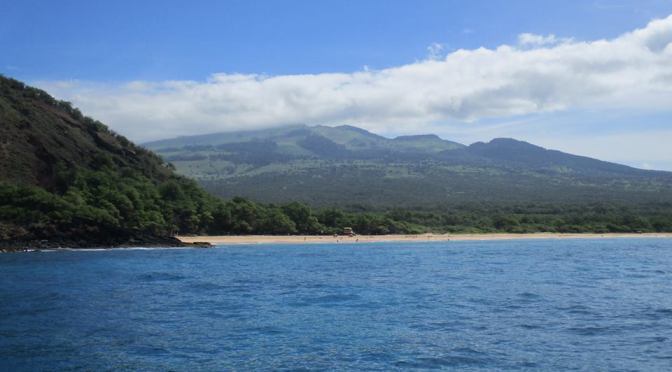 Some asthma as a kid along with a few bad respiratory infections as an adult and wala, it’s the perfect potion for a phobia fear! I hate, hate, hate not being able to freely breathe. Even with that, it never crossed my mind that snorkeling entailed semi-restricted breathing through a tube, and that maybe, just maybe, I ought to think twice about putting a mask over my eyes and nose so you can only breathe through the tube just above water.

Even on the boat ride out to a volcano rim off the Hawaii island of Maui, it never occurred to me that breathing is restricted in snorkeling. Heck, Janet and I even talked about two special young men who are Navy Seals. I even commented how I respected them immensely and could never do what they do because of the deep diving exercises that require holding onto a single breath for long periods of times.

So when the cool, real Hawaiian boat captain gave his 10-point spiel on the basics of snorkeling, a rock should have fallen from the clear sky, a foghorn sound in my brain, or at least a ‘You could’ve had a V-8 cocktail juice’ hit on the forehead. Instead, nothing but flat brain waves.

I instantly knew in snorkel class that I was better off than a Japanese woman in our group who didn’t even know how to swim. I mean, come on lady! Can’t swim? Duh!! I did take note, however, when Captain Hawaii 5-0 pointed at me and said some men with facial hair have leaks in their masks because a good seal isn’t formed, yet still…flat brain waves.

Somehow, somewhere, sometime, something should have made me ponder the possibility of, “Hey! You! Big Dummy! You know you’re about to jump in water that isn’t smooth today with a mask over your nose while sucking on a piece of pipe you’re supposed to breath through! You fear not catching your breath. This here thing you’re about to do Stephen Hawking, it don’t sound that smart!” 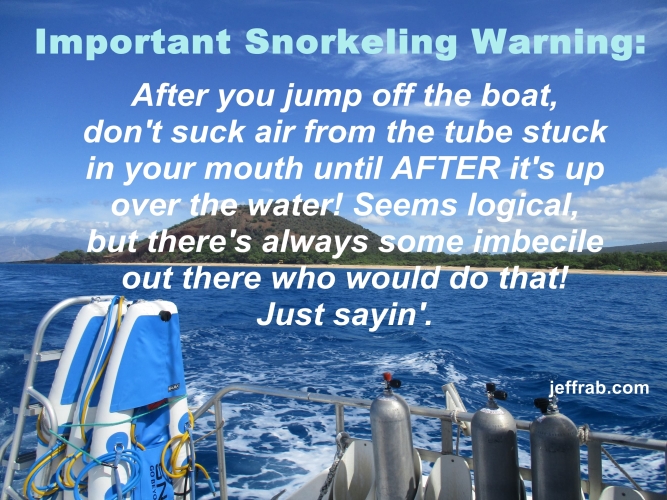 One by one people jumped in. Only a college guy who was seasick green from the rough ride out and the Japanese girl who couldn’t swim were behind me on the boat. I looked at her and thought, “Stew pid!”  Even sitting on the edge, I was completely relaxed without a care in the world.

Now just in case you haven’t snorkeled before either, the 10-point spiel in Snorkel class 101, well, it doesn’t cover all the finer points. For instance, when you drop down off the edge of the boat into the water with a mask over your eyes and nose while chewing on a piece of plastic pipe like a cow chewing a cud, well first, you’re going to go under water, all the way under, and deep. That’s not even the important thing though! The important thing is to make sure you don’t take a big breath out of the tube until you know for sure the tube is up over the top of the water. Now granted, that’s a small detail, but it’s really, really important! I mean for liability sake alone, they should make that the 11th point just in case there is some imbecile out there who might do that. Just sayin’!

So when I floated to the top of the water like a fishing cork with a large mouth bass pulling the cork every which way, the mouth tube came out so the coughing could proceed. About that time the first swell made a gentle little dunking action over my head. More coughing, and a lot of spitting, started while trying to swim with those flippin’ frog feet flippers!  I swear they feel more like concrete blocks placed on your feet by the mafia than swimming aids!

Captain Hawaii 5-0 must have seen it in my eyes, which probably told him a couple of things. First, I truly was no Steven Hawking, and second, maybe even Hawking would make a better snorkeler!  He motioned to one of the 145 pound staff members who was swimming around like he was on Mermaids Gone Wild. As the bearded mermaid came my way, Captain Hawaii 5-0 was standing on the end of the boat talking with arms crossed, “Don’t fight the water. Relax.”  He took a deep breath, like he was going into a transcendental meditation state, and said, “Reeelaxxx”.

I tried, but somehow when the breathing tube got spit out, I knocked the mask loose too. Cool Pacific saltwater went straight up my nose, which had the same effect as swimming in a giant neti pot. Every sinus from nose to toes began to blow snot like Moby Dick under attack.

The bearded mermaid was by me now and I tried to relax even though I was in a boxing match with the water. Captain Hawaii 5-0 was still talking in his Polynesian accent saying, “Reeelax. Breeeathe. Enjoy the water.” Ok, that was all well and good, but then he said, “No one ever died from drowning in saltwater; they drown from panic.”

Drown! What?? Oh no!! And what kind of logic is that? I couldn’t even answer because of the neti pot Niagara Falls sinus action still going on, but I wanted to yell, “Listen here, Captain Crunch! Nobody ever died from a gunshot either; they die from the hole!”

Bearded mermaid and I finally got back on the boat and he gave me another tube and mask that supposedly wouldn’t leak, while I took some very nice deep breaths on board. The scuba and snuba divers were all around.  I looked for Janet and she was way off in the distance. She stopped snorkeling to check on me and waved while I was being re-outfitted. I just acted like the mask was nothing more than a technical difficulty. You know how it is.

I considered not getting back in and just sit offering condolences to the seasick college guy with his head over a bucket.  That’s when I recognized the “non-swimmer” Japanese girl snorkeling away holding a noodle and giggling when she looked up from the water.

After about ten minutes, I began to get the hang of it, even though I probably looked like a pregnant walrus next to Janet who was snorkeling around like an angel fish. When it was time to go, Captain Hawaii 5-0 started calling everyone back in.  I was close by, which was just a coincidence, and started swimming back.  I looked up just as the Japanese girl passed me by on the way back to the boat! Honestly, I think she’s just a chronic, flat out liar about not knowing how to swim….and that’s all I’ve got to say about that. 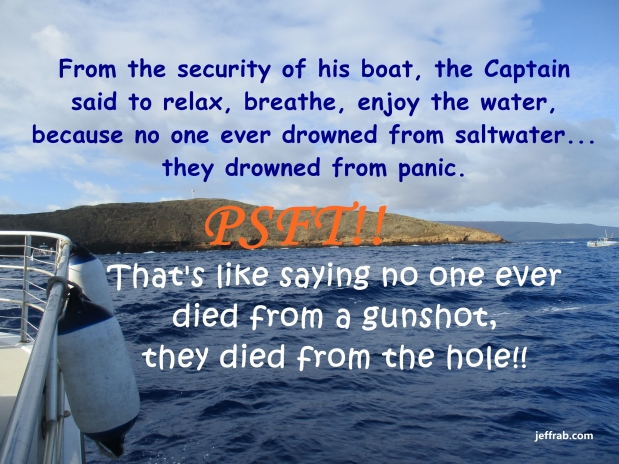 I will add though that the snorkel vision below was magnificent, and as a bonus, my sinuses haven’t been that clean in a long time. WOULD I GO AGAIN? Umm, probably, maybe….I don’t know.

A certain level of fear is good. It keeps us from napping in a busy highway or sticking a key in the electrical outlet. Everyone has some fear. Whether it’s rational or not, explainable or not, whether it’s right up front or buried deep in the mind, fear is there. From fear of heights to snakes to clowns to finances to relationships to whatever the heart and mind can imagine, people fear. It is natural, and altogether human to have fears, but fear should never dictate life. Many a man has failed due to fear, not because he failed trying, but because he failed to try in the first place. Prudent fear is wise — living in fear is folly.

What holds you back? What keeps you from public speaking, making the financial investment, befriending an odd neighbor, going to the doctor or holding a bug? Why is fear of failure stronger than living your dream? What leaves you glued to the tree limb like a clutching baby bird instead of taking a leap of faith to fly?

I don’t know. We want to let go of fear, but our nature tends to cover and deny our hidden closets that have “brave” written in crayon across the door…at least brave until the door opens and water covers the snorkel tube. Turn and face fear to overcome it, and then jump off the end of the boat, again.