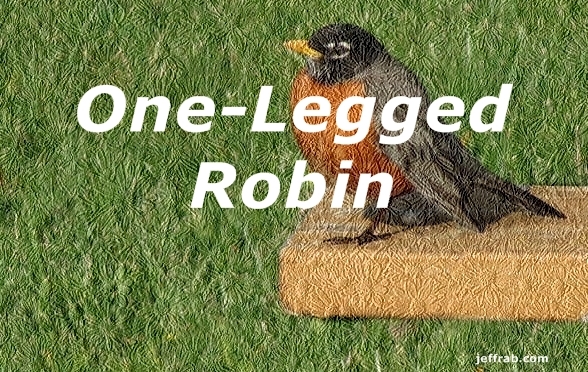 It didn’t have a hurt leg tucked under. It has one, and only one, leg.

I noticed the robin last month when working in the yard, mainly because he let me get a lot closer than most birds do before they fly off. It was working double overtime looking for food. It half jumped, half flapped its wings to move.

It hopped on it’s right leg, and the left wing stayed out just a little bit more than the other. It used its left wing to balance, and one of the feathers was a bent down a little giving it an appearance that a feather finger was holding it upright. It was a little lopsided though. The right leg and side was more muscular.

A blast from the past reminded me of one of my youngest son’s favorite jokes when he was a little boy: Where does the one legged man work? IHOP!

I looked around for Carl, our big orange cat. Carl has a will and mind of his own, and would see this bird as easy prey. Thankfully, Carl wasn’t in sight, but he’s around, somewhere.

The bird, however, just kept hopping and working to find any and everything it could to eat. The other robins glided with ease, but to even take off flying, it took a tad longer for this one legged bird. Once in the air, it flew like other birds, but it looked harder for him to go airborne, plus there’s definitely more potential risks on the ground for the little fellow.

He was out in the front yard again yesterday looking for food.

I wonder if he knows he’s different than the other birds. Is there such a thing as low bird esteem? It sounds absurd, but I seriously wonder if other robins see him differently too? And do girl robins look the other way since his one legged hop and movement is so unconventional?

Part of me wants to catch him and put him in a big atrium complete with an all you can eat feeder left out day and night. He wouldn’t have to work so hard for food, and he could live out the rest of his days in the equivalent of a bird nursing home. It would be like receiving disability payments in worms from the Robin’s Local Union 2243.

Yet, would that be fair to him? Would he really be happy, trapped in a huge cage, where he couldn’t really fly and see so little? Would he prefer a safe life of protected ease compared to the ongoing saga of survival of the fittest? Would his feathered body live, but his high flying spirit die? Is meeting the needs of a free bird in an atrium a gift, or enslavement to the owners of the atrium? I don’t know.

Sometimes, the best of intentions hurt, not help.

Do I give money, for instance, to the man holding a cardboard sign at the intersection, or do I pass on by? Is he truly down on his luck, or is this the natural consequences of choices from which he needs to learn? Is it because of a drug, alcohol or gambling problem? Would giving to that person help him stop hopping on one leg, or would it help put both feet back on the ground hastening his destruction? Is it heartless and unkind to withhold help if they squander the money? Or is it better and more merciful to let them bottom out so then, and only then, they will be ready to make changes? I don’t know. How can you tell the difference between someone who genuinely needs help and when the help is actually hurting them? 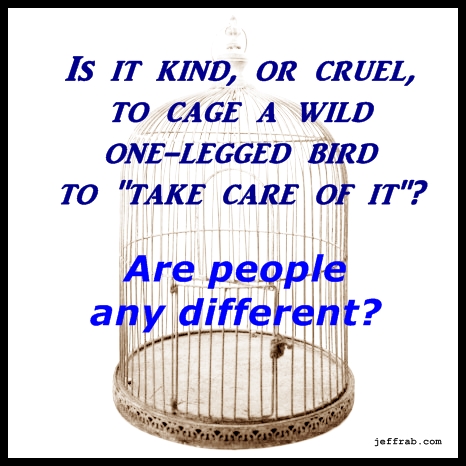 It’s easier to make the bed yourself than teach your child to do it, but is that loving, kind and fair to your child’s future well being? Does getting a warning instead of a full fledged ticket for speeding better serve you and help protect others? Does giving someone a free phone and a monthly check with no requirement to work for their worms enslave him in a man made atrium? Maybe, sometimes. Maybe not. I wish I knew.

It seems the best of intentions sometimes don’t work out. Sometimes we decide someone is a one legged robin and decide what they need. Instead of gaining freedom to fly farther and higher, we put them in a position where their bodies live, but their spirits are held back and enslaved just as assuredly as if they were chained and shackled.

Oh to have the wisdom of Solomon!

Today I won’t have to make the decision about the one-legged Robin because I don’t have an atrium. But if I did, I think that bird would rather live free and wild, than enslaved and safe. For the most part, it seems the same for people, one legged or not.