The seller dropped the keys in my youngest daughter’s hand, and with a smile, told her he had just filled up the gas tank for her too!

I’ve bought eight, yes eight used cars for each of my eight kids as their first vehicle.  Don’t be impressed. There is a set amount that has been the same for all of them.  They can spend more if they want with money they have saved, or they can spend less and take the extra cash and run.

After my initial investment, they pay their insurance, maintenance and registration tax. If they get a ticket, they pay the extra insurance costs.  It’s shared responsibility and a great lesson for life in the future.

So now my youngest daughter, the last of the Mohicans, is a proud car owner too! We started looking after The Old White Truck began to die a painful death from front end alignment issues, old age and worn brakes.  We’ll put transmission failure on the death certificate as the official cause of death.

Buying a used car is usually buyer beware.  Over the years though, I have been quite fortunate.  If you look in the right places, there are some very honest, nice folks we’ve dealt with.  That too is a good life lesson!

So this past Sunday evening when we met a man selling a car for his daughter-in-law, I was interested more in the man’s character than the car’s.  And he was as honest as the day is long! He told us everything that had been done, not done, has happened, hasn’t happened to the car.

It was as dark as midnight molasses when we test drove it with even darker rain clouds on the horizon. Likewise, it was hard to see the paint job because it’s black too.

What made up for it was the light in the sellers! 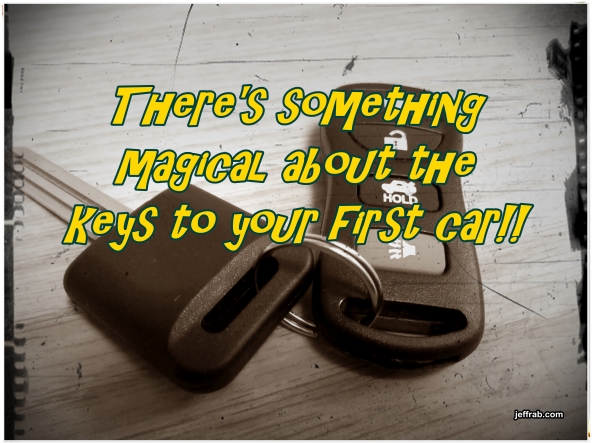 The next day we agreed on a price and then, he lowered the hammer with something shocking, surprising, and totally unexpected.  There was a $125 part his son and daughter-in-law wanted to have put on the car to make sure it was as tip-top OK as they could possibly make it!

The next day we met to make the trade. The man and his wife, also a very pleasant lady, met us halfway to deliver the car.  He handed me the receipt for the part they had just paid the dealership to put on, but the receipt was more than what he had said.  Turns out, in addition to the part, they paid for a fresh synthetic oil and filter change!

When he dropped the key in Jessica’s hand, he dropped an extra key that he had just had made. He smiled and casually mentioned that he didn’t want her to get in her first car without a full tank of gas, so he had just filled it up!  I was in awe!

And then, as if there was any doubt before, he told Jessica that he and his son had prayed over the car asking God of heaven Himself to bless it, and for the car to be sound and solid for her for years to come!  Amazing!

Who knows about this car?  It’s a used vehicle. Anything can happen.  But even if it fell apart tomorrow, the car, and experience, would be worth every penny we paid!! 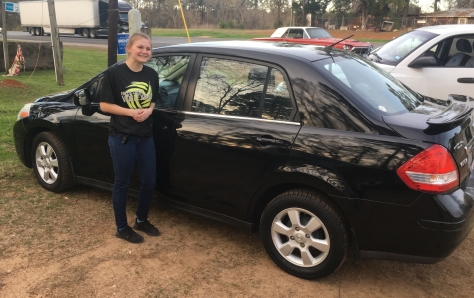 The first car of the last child!