One job, one hire. That’s all we needed.  One more dependable person with a solid work ethic, steady employment history and preferably experience in our field. Easy peasy, right? Nope!

The first guy to finish his application charged up like a Tyrannosaurus Rex chasing Barney the dinosaur. We visited a minute or two.  He’s been out of high school two years but never had a real job, although he counted mowing a neighbor’s yard. He graciously offered to do labor work, for now, but next year needs to move into a manager’s job like his dad has.

The second applicant was a bit scattered and couldn’t focus. He turned in his application and left in a hurry.

Alright, thanks for stopping by.

The third applicant said, “I need this job really bad. I’ve got to pay probation fees and back child support or I’m going to jail again. Plus I gotta pay my lawyer, and my other girlfriend is having a baby soon. So I just want to support my kids. You know what I’m sayin’?”

A couple of short interviews later a man who looked familiar stepped up. Sure enough, he worked for us 7 years ago for three weeks before dragging up by job abandonment because he was having trouble sleeping.  OK, why would we hire you again? He said he’s “grown up and matured” the last 7 years because he’s close to 50 years old now.

The next man couldn’t speak English, which is a huge problem for safety. The first thing you learn in a foreign country are words about food and money. He stared blankly at me when I asked if he liked apples, then just squinted at me when I told him he could have the $100 bill by his foot if he picked it up. (Just for the record, there wasn’t a $100 bill by his foot — not even a $50.) His friend stood to the side and then stepped up asking about identification documents. I told him we use E-Verify to verify legal work status in the U.S. for all new hires. The friend became quite nervous and they made a quick exit.

The second applicant returned to attach his resume to his application, and left, again.

Next was a man who’s been fired from his last three jobs. He explained why: 1) a jealous co-worker 2) an unreasonable supervisor and 3) attendance — but their point system wasn’t fair because it counted tardies.

No way man! Like, for real, tardies? Aww dude, go get yourself some major therapy for that!

It was 83 degrees and warm, but the hot, humid Texas summer is almost here. The next applicant, however, was sweating profusely. Shaking his hand left a sweaty mess in my palm. He talked about how he liked outside work, yet spends most of his time indoors.

The next guy tried to shake hands with a thumb to thumb handshake, but I kept my hand extended for the traditional handshake. He had no idea what to do with that. When he finally shook hands, kind of, it was the limp hand, dead fish grip.

He made no eye contact and almost spoke in a whisper. This young guy just needed a daddy growing up, that’s all. Unfortunately, there wasn’t time to privately show him how to shake hands, and for that matter, to teach him how to work. Poor guy. Maybe he could make it, but he needs some help.

The next applicant’s body language included a forced smile, chin up in the air, fast talk, shifting eyes, hands crossed unnaturally in front of him and all the while swaying from side to side. He loudly introduced himself with, “I’m just a hard workin’, God fearin’, church goin’ man who needs a good job with this fine company to help take care of my family.”

Where to start? First, body language speaks louder than words. Second, a man who starts off saying that is usually a con. If he’s legit, he doesn’t have to say it. His life and actions say it for him. Third, if you want to take care of your family, then don’t quit your last three jobs after working a few weeks.

The second applicant returned once more to add his cell phone to his application instead of just a land line. Mr. Goldfish Memory wrote his cell number in and left, again.

Person after person came through the line….

There was a towering man who introduced himself as “Mr. Williams”, heavy emphasis on the ‘Mr’. I asked about a gap in employment and what he’s done the last 8 years. Prison. I told him over the years some of our best employees have been on probation or parole IF, and only if, they had made a 180-degree change.  He assured me had, but his prideful manner, cutting statement about being better than his buddy in line and his superfluous attempt to look friendly from behind his intimidating stare begged to differ. 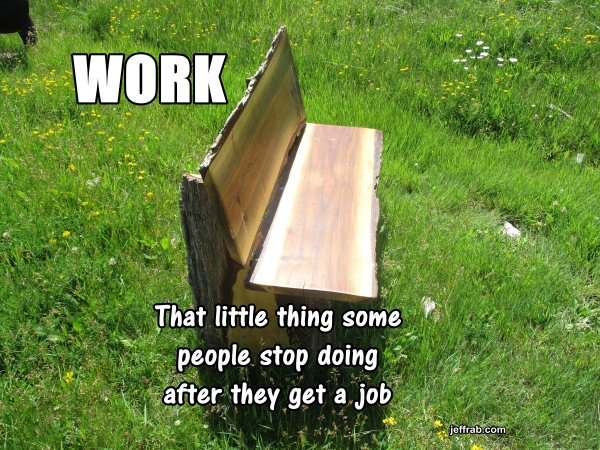 The next person held out his application. Long term employment. Check. Six years relevant experience. Check. Dressed for work. Check. I asked what the most important thing on the job was? “Safety!”, he said without hesitation. Double check!

I told him the work is hard. It’s hot in the summer, cold in the winter, dry and dusty when it doesn’t rain, wet and muddy when it does. Questions?

“Yes sir, I need to give two weeks notice to my current employer. Would that be OK?”

Hopefully I picked the best one and didn’t miss a diamond in the rough, or even a bright shiny one.  All the applicants need work, yet not all want to.  In fact, a lot of people quit looking for work when they get a job!

An hour and half later and everyone was gone. I was gathering my stuff when the second applicant walked back up and asked if we drug screened.

He shrugged his shoulders like he had just lost out and said, “Never mind my application”.