As much as one of my sons likes fishing, Saturday was his best catch ever!

Todd was married Saturday.  It’s a pleasure to officially gain a new daughter, Kolby!  We are proud to place her picture on the family wall with Todd and the siblings of a really, really large family.  But, there’s always room for one more!

Their wedding was a small, country wedding. Simple, yet elegant, small, yet enormous.  There was nothing pretentious about it.  It was just real, down to earth real.

Besides, a wedding is just an event. Marriage, that’s the accomplishment!

Before the wedding, Todd and Kolby wisely sought out premarital mentoring. For the last few months they’ve met regularly with a an older, wiser couple who have seen life’s ups and downs, life’s blessings and challenges, life’s beautiful sunrises, as well as some unexpected sunsets.  Anyone who knows this couple would describe them as genuine, peaceful, kind, and generous!

They would casually sit around the kitchen table, or talk on the sofa, about the practical, day-to-day things of marriage.  Their future life together was focused into perspective by this older, Godly couple who shared very personally what it takes.

It was an accident really, that I read on Facebook Saturday that the older couple who mentored them were also celebrating their wedding anniversary the same day.  It wasn’t just an anniversary, it was their 50th wedding anniversary! Fifty years of marriage!! Remarkable! Beautiful! Inspiring!

Consistent with their character, the couple sought neither attention nor acclaim.  In a simple Facebook post, they simply acknowledged the same love and commitment to each other that they had expressed fifty years ago at the altar. 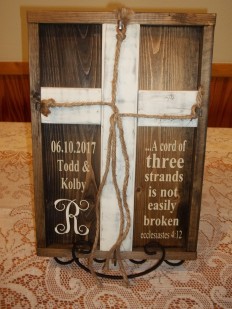 Earlier that day we bumped into them downtown at an annual local festival.  True to form, true to their beliefs, they started their wedding anniversary that morning by passing out free bottles of water at a church booth.  They concluded their 50th wedding anniversary by attending a wedding.  That’s so apropos.

It was an honor and privilege to get to sit with the couple at the wedding reception. When it came up about it being their 50th wedding anniversary, they both humbly smiled and deflected the conversation back to my son and his new bride.

They didn’t want attention, but how do you not pay attention to fifty years of wedded bliss? How can you not stop, reflect and admire them both for their example and undying commitment? Isn’t that, after all, one of the goals and purposes for marriage to start with?

Looking back today, there’s so many questions I wish I’d asked.  Like what are the keys? What’s been the hardest thing in 50 years? What are the top three things you’ve found to make your marriage successful? Are you just as kind and gentle in your words with each other as you are with others?

Todd and Kolby got to ask those questions!  They were able to experience, firsthand, the knowledge and wisdom of this golden couple during their mentoring sessions.  They were privileged to hear about some of the victories, the challenges, the stories of fifty years together.  For that, I am ever so grateful!

As Todd and Kolby stood at the altar Saturday, June 10, 2017, from an unassuming seat near the back, another couple, who were married on Saturday, June 10, 1967, quietly watched.  There were no huge banners for them, no fireworks, no golden cake, but in their own way maybe they were able to relive at least a part of their magical day 50 years ago.  Maybe they got to look back and reminisce a little.  I suspect they also looked forward to their future together in a marriage that has been, and will be.

In all of Todd’s fishing, I hope and pray this is his sweetest catch ever also! And maybe on Friday, June 10, 2067, Todd and Kolby will have the privilege of sitting in the back of a small country church and watch a young couple they mentored exchange wedding vows on their 50th wedding anniversary.  Maybe they too can reach over and grab the other’s hand, weathered with time, and celebrate all of the ebbs and flow of life that they have seen over the years.  Maybe they too will know that it’s all good till death do them part.