A front end alignment appointment at 8 AM on Saturday seemed straight forward, but trucks, cars and mobile equipment were everywhere. Inside, about fifteen men were waiting. Interestingly, all were wearing boots, jeans and a plaid or denim shirt, except for the tire shop owner who was dressed up because he had on a Magellan fishing shirt. That’s not an endorsement or condemnation of anyone, just a local clothing colloquialism.

When a middle-aged man walked in wearing designer shorts, spotless, name brand tennis shoes and a lime green dress shirt with a fuzzy vest over it, he stood out like a leprechaun at a slam dunk basketball competition. Even more so, his overly bronze face and legs looked more like a tanning bed accident rather than nature’s sunshine reward and he seemed, I don’t know, awkward. Each black and silver hair was perfectly in place and not one of them moved, even in the wind.

He walked with a “I’m a king and you’re all paupers attitude”. I wasn’t the only one who noticed him. I have a sneaking suspicion every guy there thought, “You’re not from around these here parts are you, boy?”

The tire store owner is a nice guy, but when he was making rounds meeting and greeting, he made short work of talking to the lime green Don Juan wannabe. After a quick handshake, he slipped away to the coffee pot, but Don Juan cornered the owner as he grabbed a donut from a big open box. He offered one to Don, but Don said he never touched the things because they are bad for you. The owner’s expression didn’t change as he chewed like a cow on a cud, but I’m pretty sure I read his mind and, well, in good conscience, I can’t put his thoughts on paper.

Don droned on about his last trip, cars he’d owned, and how red wine is supposed to be good for the heart. Another man sitting on one of the worn upholstery couches stared at Don for a minute before slowly bringing a Coke can up to his lips to spit Skoal residue. He raised one eyebrow slightly before cutting his eyes back to a gun rights news program on a big, old fashioned, picture tube TV. I’m absolutely positive I can’t put his thoughts on paper.

A Spanish-speaking employee came in and spoke to the owner, who looked quite relieved. They rattled back and forth in Spanish before he shook his head, pointed a few times and left the coffee pot area like a baby bird set free from the grasp of a hungry cat.

I watched Don Juan on the sly for the next few minutes as he walked around the large waiting room with his hands in his pockets, except once when he reached down to rub a scuff off his shoe. 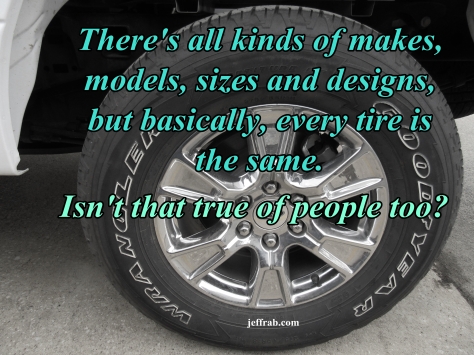 Maybe it’s profound. Maybe it’s just an epitome of a shallow mind, but it hit me that Don Juan wannabe wasn’t really any different from any man there, myself included. What Don really wants is the same basic thing. First, repairs, tires or an alignment, but beyond that to the intrinsic, he wants acceptance, to fit in, maybe even admiration and appreciation — the kind of things all men need, but won’t say.

So what if he was dressed like a city clown in a country tire store? If I were at a tire store in his neck of the woods, or more accurately said, a tire boutique strategically located in a mainly concrete, landscaped suburb, I’d probably stand out too. Some guy there would be watching on the sly and think I look like a rodeo clown from Hickville. Another man would stare at me for a minute and raise one eyebrow while taking a sip of his Pierra water before cutting his eyes back to the HGTV program on a super thin wide-screen TV.  More importantly, I wouldn’t be able to write his thoughts about me either.

There’s something to learn there, because honestly, after putting the shoe on the other foot, I didn’t like that realization.  I still don’t.