He whizzed by in the gas station heading to the drive through car wash around back. If I hadn’t stopped, he would’ve hit me. He didn’t even notice. His mind was on his cell phone call, not driving. I ended up waiting in line right behind him.

He got out of his truck while in line to unscrew his radio antennae. On his back window was a bumper sticker with “Coach” and his first name after that.  He was still talking on his phone with great animation.

I’m vaguely acquainted with the man but know he’s a smart guy who works in a professional position in town. You wouldn’t guess it though. He is totally, whole heartedly, over the top about coaching his daughter’s off season high school softball team. When I see him, it’s always the same.

He was wearing a T-shirt with their school colors. On the back was a softball with the name and position of every player on the team, and at the bottom in pronounced letters was his name listed as “Coach”.

My windows were rolled down, so I clearly heard part of his phone conversation about a tournament last weekend. He was still angry about a call at second base which, according to his side of the conversation, “cost my team the win and kept us out of the championship”. He sounded more like he was an ESPN analyst talking about the last Super Bowl than a spring league softball team.

He’s about 50 years old, old enough to have matured past this. In his mind though, the primary identity of his whole life rests in his role as a volunteer softball coach.  It’s sad, really.

I followed him through the car wash, and afterwards, realized I’d parked next to him at the vacuum cleaners. He was still on the phone, but talking to someone else now. He was talking about who to pitch this weekend and how many left-handed batters the other team had. 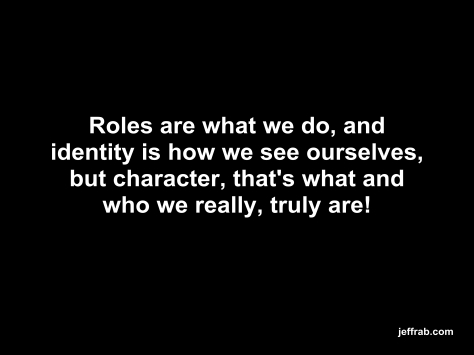 I just kept my head down, vacuumed, and to no surprise, finished before him. I was getting in my truck when he made eye contact.  He was still on the phone, so we both nodded our heads in acknowledgement and went on our way.

Everyone has roles to fill in life, whether it be a parent, spouse, friend, neighbor, employee…or a kid’s team coach. Roles, however, are not identity.  It may be a part of us, but certainly not the whole kit and caboodle.

Roles are what we do. Identity is how we see ourselves, and character is what we really, truly are.

Failing to see yourself accurately is like a dog chasing its tail. A man can go round and round and never catch that illusive thing he thinks will give him value, meaning and purpose in life. Roles have to be balanced. And unfortunately for this man, he sees his role as a ‘coach’ both as his identity and character.  It’s not.

The stark reality is that in ten, five, probably even next year, no one will remember, or even care about the call last weekend at second base. The girls on his team, in the best case scenario, will wear out their team T-shirts. Most, however, will just throw the T-shirt away or dump it off at the Goodwill a few years down the road.

Don’t get me wrong. There’s absolutely nothing wrong with coaching a team. It’s fun, actually. A lot of fun! But it’s sad, and woefully lacking in insight, to assume your entire identity from a single role in life, especially one so temporal.

Good luck ‘Coach’ against the left handed batters this weekend. For your sake though, I hope when you’re on your death bed there are more important things to remember than the bad call at second base.

12 thoughts on “Is It Really Worth That?”