The natives were restless. It was the fifth day of no power after a hurricane knocked out power lines throughout East Texas. It would be several days longer before electricity was restored. The only power came from a generator that ran a freezer, fridge and a couple of fans, nothing else.

The boys were getting a war-torn look in their eyes. They were bored.

One of life’s formulas is: Bored teenage boys = dangerous ideas divided by stupid actions.  It’s just a fact of life.

They boys played all the games they knew, even invented new ones, but it was Jared, who was 16 at the time, was the first to cross the “throw down and fight line”.  He ambushed his three brothers from behind with an air soft gun.

Air soft guns shoot plastic BBs, but they are anything but soft.  It’s another one of those life formulas: Brothers plus air soft guns = danger multiplied by emergency room visit.

As Jared said later, “I just shot my brothers for fun, ya know. Just for fun!”  After I stopped the lone active shooter, I had to stop the other three from lynching Jared.

Jared’s nonchalant justification was, “But I only shot them in the back and legs” and there was just no way he could miss and “shoot their eye out”.

He knew better! He saw what happened in The Christmas Story movie a hundred times! 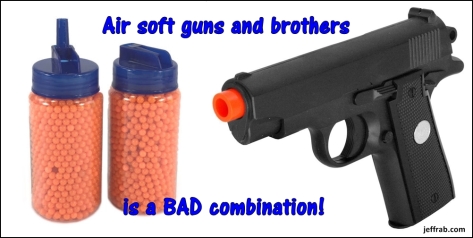 Jared was miffed when I had fussed at him for “dangerous behavior”, and in no mood to make amends with his brothers.

In the mean time, they sat smiling like three foxes about to jump into a hen-house. They felt justified to lynch pound their brother because they had been “attacked”, the poor, cuddly, innocent little foxes!

In no uncertain terms I told them all to stop it, stop it all! I’m pretty sure they heard me mumbling about foolishness, testosterone morons and that they didn’t get that from my side of the family!

So none of them were happy with my solution, but they all stopped!  Kinda. Sorta. In a way. OK, not really at all. It just kept going!

Jared, mainly out of fear of retaliation, came up with an entertainment idea. He took a portable DVD player and plugged it in the cigarette lighter of his truck. Soon Blake, Todd and Clark were trying to get inside Jared’s truck too to watch a movie.

Jared quickly locked both doors, then dove to lock the back sliding glass window as Todd tried to squeeze in.

Suddenly, all three brothers wanted to be Jared’s “favorite brother”.

When Todd realized it wasn’t going to be him that day, he knelt down and started letting air out of one of the tires.  He left the scene of the crime after I fussed at him for “ridiculous behavior”.

Next, Clark tried. He played the youngest, innocent brother card thinking maybe, just maybe, Jared would let him in. He pressed his little face up to the passenger side window and gave a big puppy dog look with a flickering eye that said, “You really are my favorite sibling”.

It didn’t work.  Clark tired of the game and left after Jared let down the window visors and began hanging towels and t-shirts to block the side windows so no one could even get a casual glance of the movie.

The back window was eventually blocked too after Clark set up a lawn chair in the truck bed to watch.

The oldest brother, Blake, figured he had the cat in the bag. He meandered to Jared’s passenger side door, looked around to make sure no one else was around, and began knocking on the window. Jared parted two towels to peek outside, then slammed them shut.

Blake drew out his words to emphasize his insincere sincerity.  “Heey, Jared! Lemme innnn. I wooon’t let them innn. Promise!”

Blake tapped the window over and over, “Jaaared, lemme innn!”

Blake’s tactics weren’t working, so he changed to a threatening tone.

That backfired because Jared sensed he had the bull by the horns. He jerked the towels open. “Or what Blake? Or WHAT?! Leave me alone! I’m watchin’ a movie”!  For dramatic effect, Jared faked a really big smile at Blake before he snatched the towels back in place like an exclamation point!

Blake knelt down and started to let air out of his tires.  When he saw me looking his way, he shuffled away mumbling something about foolishness, moron brothers and how Jared was going to pay.

Jared took one last victorious peek from behind a t-shirt hanging on the rear view mirror covering the front windshield. He looked like he had just won a million dollars before readjusting the t-shirts and towels to block any conceivable view inside.

I got busy elsewhere and forgot the whole thing. Not the other three brothers!

Blake went back to Jared’s window a few minutes later and began tapping on the window asking again to get in. Jared, of course, emphatically said no. Blake kept tapping on the window to distract Jared while Todd and Clark, at the same time, strategically let all the air out of the back tires, then the front tires.

After thoroughly enjoying a long movie, Jared opened his truck door and almost fell over when he stepped down because the ground was much closer than before.

Jared’s truck had four completely flat tires!  At first, he was amused when he realized what his brothers had done.

But then…the amusement didn’t last long because one eye brow began to slowly rise while a glowing red ember of revenge began burning in the other eye.

Jared reached inside his truck, grabbed his air soft gun and began reloading plastic BBs for another surprise assault.

In the end, they worked it out because it’s all fair in love and war, and really, this was just love.  Just kind of twisted, unconventional, somewhat backwards, brotherly love.