She remembered an incident that happened years before and burst into laughter.  Instinctively, her hand went to the rocking chair beside her.  The blade of reality cut as she returned to the present.

She took a deep breath, closed her eyes to regain her composure, and settled quietly back into the rhythmic rocking of her chair.

The years since he retired were some of the best and enjoyable evenings of all. Each knew, however, that the sunsets they watched from their front porch rockers were similar to themselves.

Even so, when he was diagnosed with stage 4 pancreatic cancer six months earlier, it seemed like a short time was cut shorter, for it was all too quick, too sudden, too complete.

In his last days they rocked for hours at a time in a quiet, loving solitude as the sunset of his heartbeat turned into night.  Three and half months after his diagnosis, her husband of many years was gone. 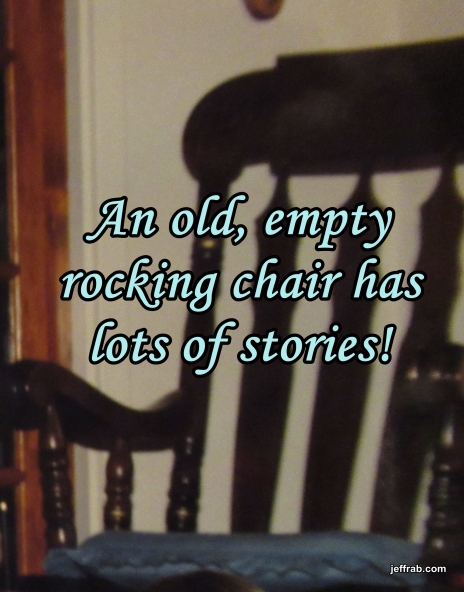 Each night she continued to make tea and cradled the warm cup as she rocked in her chair.

Some may consider her a little odd for doing so, but sometimes she talked to the rocker and the man who used to sit there beside her.  Occasionally she would give it a little push just to hear it creak, sit back and enjoy the movement of the curved wood.

Sometimes as the sun was going down, she would close her eyes and imagine days gone by when the sun was at high noon and the grandness of life, coupled with the daily monotony of activities, seemed so ordinary.  In hindsight, it all seemed extraordinary.

Yet when the sun goes down, darkness follows.  With almost eight billion people on earth, it seems there’s no reason for loneliness, pain or sorrow. On the other hand, when the rocking chair is empty, it’s not the eight billion plus you feel, it’s the minus one.

After life’s sunset, an empty hole and darkness can flood those left behind, but good Lord willing, the sun comes up again and the hope and light of a new day takes hold.

A rocking chair isn’t just a chair. It’s a part of life, from a newborn babe rocked in his parent’s arms to a way of thinking in old age.  It’s becoming a lost art of our culture, but the gentle, quiet rocking back and forth at the end of the day is still a connection with life, those closest to us, and even God Himself. 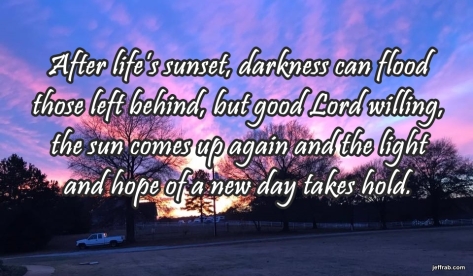 A peaceful, iconic view of contentment in old age can be learned and experienced from a porch rocking chair. When the sun begins to set, and it always does, and one chair goes empty, go sit in the empty chair awhile.  There’s much left behind in an empty rocking chair. Just rock there for a while. You’ll feel it too.

13 thoughts on “A Rocking Chair of Life”