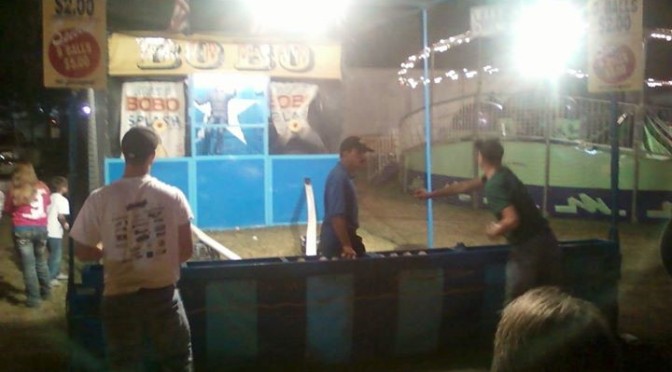 Three balls for $2 or nine for $5 — man after man, boy after boy, redneck after redneck, stepped up from a large semi-circle of spectators around the dunking booth at the Brazoria County Fair, Texas.

Sitting in the dunking booth surrounded by carnival rides and loud music, the little clown face painted man was easily heard above it all.  “Ayayayayayaya!“, Bobo hollered into a microphone.  He had no shortage of insults for anyone who dared pick up a ball trying to drop him in the water.

They’re only prize was to see Bobo drop in the water, but he and his worker were making money hand over fist.  His abrasive voice rang out over loud speakers and like flies to a spider web, one by one he lured guys in to plop down their money.  As soon they stepped in his web, Bobo started. His constant chattering, challenges and chastising made you laugh hysterically at times, wince at others.

The nature of young men is to battle, in one shape or fashion, to show their dominance, and Bobo capitalized on this — all the way to the bank.  Everyone knew what was in store as some overconfident ego filled guy stepped up like a gladiator to throw a ball.  In most cases, the gladiator walked away humiliated.  For spectators like me, it was hilarious.

No matter who it was, Bobo ripped them.  Just a few actual examples of his ruthlessly raw chatter include:

“Hey you, you big ear redneck! Give it up farm boy, this ain’t no hay barn!”

“Julio, hey, hey Julio! Just cause you swam across the river to get here don’t mean you can make me swim in here!”

“Aw come on gay boy! You throw like a girl. Go home and play with your Barbie dolls! Ayayayayayaya!”

“You! Yeah you, the short bald pudgy guy….that’s your best throw?  Bahahahaha!”

One intoxicated cowboy stepped up and hit the target his first throw dropping Bobo in the water.  Encouraged by cheers from the crowd, the next ten minutes the same cowboy put down $5 after $5.  He got so frustrated with Bobo’s constant bantering, his throws began hitting everything BUT the target.

After spending $30 or $40, and being egged on by his friends, he plopped his last $5 down and announced to the crowd he was now broke.  All the while, Bobo was singing, “I’m a Toys-R-Us kid” to him over the sound system. 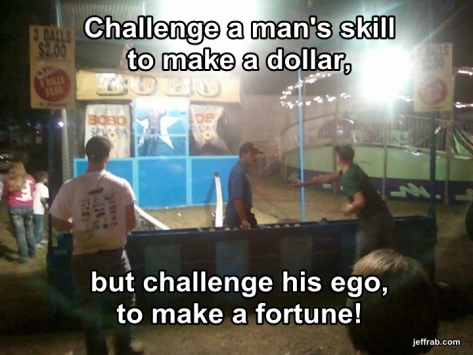 Totally humiliated, the cowboy began to call out Bobo to fight.  Bobo answered, “Ayayayayaya” over the man’s voice adding, “Get out of here stupid!”  The cowboy’s friends drug the raging mad cowboy off, only for the next victim to willing step up.

Up steps a 10 year old boy who was as wide as he was tall wearing a new, but way too tight Angleton Wildcat t-shirt.  “Oh come on cream puff!”, Bobo told the boy, who promptly missed all three throws…. “Go get your mama or daddy sonny”.   He did.

Five minutes later, the plump boy brought his really plump daddy….all 6’8”, 375 pounds of him.  He wore an identical purple and white t-shirt as his son, and just like his son, he squeezed into a 3XL but really needed a 4XL.

Bobo quipped, “Holy cow! Cream puff brought the whole herd! Are you a cannibal man? Cause it looks like you ate your whole family. Ayayayayaya!”  The big man calmly smiled and threw, narrowly missing the target.

Bobo went after him, “Hey Daddy ‘O, you need to lay off the donuts!” Another close throw, another insult.  “Oh come on fat so, you throw like a wimp!” bellowed Bobo laughing.  A couple more throws, a couple more comments and the big man began to fume with ire and his throws began landing everywhere but on the target.

Bobo calmly sat on the dunking board and did a pretty good imitation saying, “Hey, hey, hey, it’s Fat Albert!”  Angry, but grasping for his senses, the big man simply smiled after his last ball missed by a mile, waved and went on his way.  Bobo had his hand up to his forehead making a big L sign for loser, and then two long haired teenage boys with braces on their teeth stepped up and paid…

There’s something about human nature, particularly guys, where we allow ourselves to get sucked into a competition where the cards are stacked against us and there’s really no way to win.  It’s completely different if it’s important, but just to knock a guy in the water who’s already wet?  Yet, for the sake of ego, we forge into a no win fight thinking it manly.

I find that fascinating.  Bobo finds it profitable.

I think the next disagreement I’m in, whatever, whenever or whoever that may be, I need to stop and think about Bobo and conscientiously wonder if it’s important enough to fight for.  If it is, then by all means fight with everything in you to win.  If it’s not, leave the balls on the table and the $5 in your pocket.