When it goes right, home repairs and DIY work is fun. On the other hand, Bessie hold the barn door closed when it goes wrong!!

I updated a bathroom. There wasn’t exactly pressure to get it done quickly, but with four teenage girls in the house at the time, taking one of three bathrooms out of commission makes day-to-day life a bit more hectic, and when they’re all doing their hair at once,  dangerous!

Each phase of the potty house renovation was down on paper, (that’s notebook paper, in case you’re wondering).  I pulled up the commode first, and other than an unexpected splash of water in my mouth when moving it, it was easy as pie, or easy as….well, never mind.

The floor and wall tiles came off with a little elbow grease, and all was going as planned.  Yay for a bathroom paper plan!

Then came the manly work of ripping out the old counter top and cabinets with a hammer and crowbar.  Just thinking about it still makes me want to beat my chest like King Kong on a banana barge! 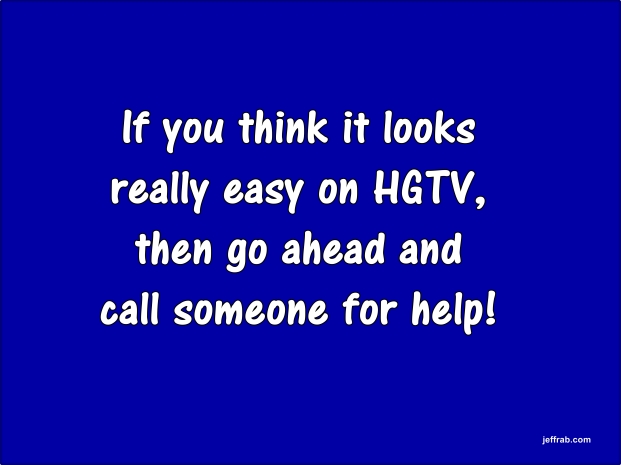 The next four evenings I patched and textured sheet rock, raised a plug, put in new fixtures and switches, installed a new base cabinet and sink, painted, tiled, grouted, installed baseboards and trim.  I put the toilet back in place (with mouth closed), hooked up the sink fixture and last, but not least, was going to hook up the sink drain and call it a successful bathroom remodel!

Yep, exactly as planned!  Honestly, I was (past tense word) pretty proud!  My bathroom remodel made the home repair TV shows look like lame rookies!

There was one little bitty problem: the old sink was a right counter sink; the new one was centered.

Didn’t matter.  I’d just extend the pipe six inches to match the drain pipe in the wall that disappeared under the slab and goes wherever water drains drain.

I carefully looked it over, HGTV style of course, and figured out what was needed.  I bought everything at Lowe’s to install the drain, but the pipes were a 1/4 inch too big.  Oh well, just one more night of no sink use.  The next evening I went back to Lowe’s to return the wrong size pipes, pieces and parts to get the right sizes.

Honestly, I was (past tense, again) as a peacock, even though I probably looked like a beached whale laying half in, half under the sink cabinet getting those last six inches plumbed.

Unfortunately, after fifteen minutes of trying to figure it out, I realized I bought the right fixtures, but they were 1/4 inch too small this time.  Well, vomit!

On the third visit back to Lowe’s, the lady who checked me out twice before slyly asked, “Having problems?”   I didn’t answer her nosy, busy body question.

She proceeded to say her grandfather was a plumber and I may need to call him.  How rude!  I don’t need a plumber, dad gummit! I watched a 30 minute bathroom remodel on HGTV!

Still confident as Custer marching to Little Bighorn, I assured her I had it all under control, but added for good measure that if she saw me back again buying pipe materials, then yes, I was having problems.

This time I had all the right stuff.  I systematically, very carefully, permanently glued the pipe joints onto the drain stub in the wall.  After fiddling with the last two pieces for 45 minutes trying to make sense of why it wasn’t fitting together, I heard a little voice in my head, “Uh, General Custer, you glued it backwards”.

Now I had troubles, but it was 9:30 PM and Lowe’s was closed anyways.

I obsessed about that little pipe section the next day. There was only one option, two actually, but I wasn’t calling a plumber, so I cut the stub out pipe flush against the wall and started over.  My cut was crooked but it was just enough room, barely, to make another connection, but that made the rest of the pipes I had a tad too short.

At Lowe’s I made a wide loop avoiding the plumber’s granddaughter who was up front checking again.  She went to break, which was great, so I made a made dash to the check out line.  It was the fourth complete evening of plumbing six inches of drain water! Six inches!!  Dag nabbit!!!  Six inches!!!!  Might as well have been to the north pole!!

Anyway, I finally got it hooked up.  It leaked.

After more plumber’s putty, Teflon tape,  PVC glue and channel locking every fitting as tight as humanly possible, there were….drum roll please….no leaks, no runs, no drips, no errors….although technically the no errors part could be debated.

I checked for several days to confirm there were no leaks, but even if there were, I was NOT calling the checker’s plumbing grandfather!

So then I began remodeling another bathroom, and it went really well!  This time I was (yes, past tense) fly to the moon in a helium balloon proud!!

All that was left to do was hook up the drain pipe to the water trap, and…well…umm…I don’t know what happened, but here we go again…

29 thoughts on “Just Six Inches Away”