There was a long line for the first interview.  It was person after person in rapid succession.  I wrote “high risk, high reward” on his application because everything pointed to him striking out as an employee, but IF he made it he would be a home run.

A few days later I was getting pretty desperate and went back through applications. There he was.  After a bit of head scratching, I called and left a message.  Within minutes he called back as excited as an elementary boy alone in a candy store.

He was 15 minutes early to the second interview the next day, which is a good sign, but hyperactive as that same elementary kid who ate ALL the candy!

I asked him to tell me about himself.  A gun fired and the race started.  Without breathing, he told me he had graduated from high school seven years ago and everything about himself except which was his favorite tooth.

“Relax. Just tell me about your work experience.”

Zoom! He weaved in and out of his thought traffic jam.

I went and got a co-worker to sit in on what was turning into a very interesting interview.

“What was the longest job you’ve had?”

No blinks, no breaths, no hesitations.  “Well, my longest job is about six months and that’s where I’m at now because I’m trying to get my life together and do right and do what a man is supposed to do and be what I need to be and act like a man should act. You know what I’m sayin’?  Hey! I used to think I knew a lot and had it altogether.  No! Uh, uh! No!! I was just a shell of a man with a boy inside!”

He never stopped.  “I thought like, I don’t need to work, cause ain’t nobody but nobody gonna tell me what to do!  But ya know what I learned? That you got to take criticism on the job cause that’s gonna make you better, and when you get better, you do better, and when you do better, you get somewhere.  It’s like this, cause you need to know I was a shell of man then, and cause of that, I’m on probation cause I did drugs — I did drugs, but never sold them, but I did do drugs and liked to have died from it too man!”

“But you know, I got lucky! See da police stopped a car I was in, and they like just looked at me and knew I was down with everything with drugs, so they took me in.  I said like, ‘Man, you can lock me up if you want, but I need some help cause if I just stay in here man I’m gonna learn more stuff in this jail and you’ll be picking me up again cause I need some help here!’  You know what I’m sayin?”

“So the cops were cool with it, and they helped me out. They really helped me.  They looked out for me and said I had to pay the consequences, but they got me some help and I went to a 3 month rehab program. I been clean 4 ½ years now, but I’m trying hard to find me some decent work instead of all these little minimum wage jobs. Hey, I like my work, you know what I’m sayin’, but man I’m trying to get somewhere and make something of myself! I got six more months on probation and then I’m clear and I ain’t going back! I ain’t never playing on no street no more!”

Intrigued, I asked what made the difference in treatment?

“Man, it ain’t hard to change! You just gotta think different in your mind, body and soul.  You gotta like say to yourself, ‘You know what man? I ain’t doing no fool stuff no more because I’m through being a boy!’ I go to my street now and they say, ‘Come on man! Come on and go with us!’.  But I be like, ‘Naw man! You ain’t nothin’! You ain’t goin’ nowhere. I’m going somewhere man!'”

“And so instead I go find young boys on my street and say, ‘Hey, I was just where you are! You ain’t got no daddy. You think you’re all bad and stuff, but you know you ain’t nothing if you go with them! You going down if you go with them!  I used to think my daddy was those guys on the street too, but they ain’t no daddy! They just punks, man! They just punks!  Ain’t never been some guy on the street saying all that who ever did nothing with his life. Nothin’ man. I’m telling ya, nothin’!”

“Hey, I ain’t gonna lie.  I used to talk smack and went around talking noise like I was somebody. Uh, uh! No! If those cops hadn’t arrested me and helped me with treatment man, I’d be like in the jailhouse or dead. You know what I’m sayin’?”

He stopped for a breath and looked us both square in the eye, like he was making sure we really understood.

I asked how he’d be on the job if we hired him. He went right back into high gear.

“You the boss, so you know what?  I got to do what you say I got to do, and what I got to do is take your criticism and make me better”.

I told him we don’t criticize like that, but he responded, “Naw man! I’m saying you tell me what I need to do different on work or what to do to be better, and that criticism helps me get better.  When I was a shell of man, ain’t nobody could tell me nothing, but a real man listens and learns. Know what I’m sayin’?”

“My granny, she done died, and I still miss her and everything, but you know what she always told me when I was a kid, ‘Get up and go do your school. Listen to your mama and quit being so thick headed cause you can make something of yourself!’ Granny used to tell me, ‘Boy, a hard head makes a soft behind!’, and she right! She right!”

I asked what she meant by that.

“You know, it’s being a shell of a man with the heart of a boy! You don’t listen and nothin’ gets through that thick head cause you think you bad and smarter than everyone else and think you know something man. You think you don’t have to work cause you’re in the streets, like you really something, but ain’t no work going on there. A hard head makes a soft behind! A man got to listen and learn to be a real man. It ain’t those dudes in the streets! Granny wanted me to be something and she ain’t never seen it in me before she passed, and now I can’t show her that I be for real now.  I gotta listen, cause I get better with that man!” 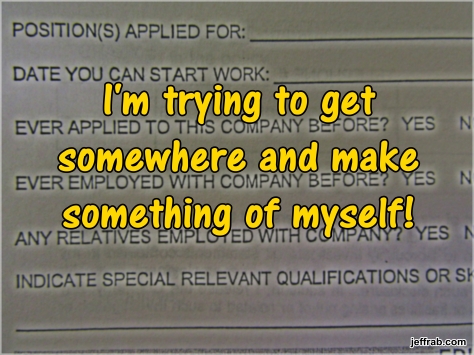 I smiled.  I’d never quite heard it put like that, but told him he was right.

He laughed saying, “No sir! Not me! Granny was right!”

For the first time, he hesitated. His eyes became misty and his speech slowed.

Bumping his chest with his fist to emphasize his point, his eyes welled up with full-fledged tears. Moved by emotion he said, “My mama came to me last month and told me she was proud of me! That was the first time man! She say she sees how I been tryin’ the last few years and how I’m different and tryin’ to get somewhere, and she told me, she say, ‘You doing good! I like what I see you doin’ and I see you tryin’ real hard. You keep tryin’ cause the good Lord gonna come through for you like sun through the clouds!'”

“He’s gotta look ahead man cause in the pen you can only look behind.  You know in five years, I wanna have my own house to rent, and maybe own a couple old cars. And I got three small boys. They 7, 5 and 3 and I wanna be a daddy in the mix.  Their mama raising them and I been trying to help out with money and see ’em and stuff.  They need a real daddy.  I want ‘em to grow up and not be like the me back before, but like the me ahead, so they know how to go right from the start. And you know man, when I get to be y’all’s age, I wanna be steady for ’em and be a real man.”

My co-worker asked if he had any questions for us.

I told him and his face lit up.  Raising both hands above his head pumping his empty palms to the ceiling, “Aw man! I ain’t never made that much money before!”

When I told him he’d have free insurance 90 days after employment and went through the other benefits, he was ecstatic.

When he was leaving, I noticed the clock. We had a one hour interview for an entry-level position.  In 25 years in human resources, I’ve never come close to that long for an entry position, but this one was different, unique, special.

Later in my office I was dangling my glasses between my forefinger and thumb looking over his application.

How many people over the years have promised the moon, but failed to even deliver a spoon of dust?  Plus, he’s never worked a job more than six months.  We’re looking for the long-term employees who will stick with it……….