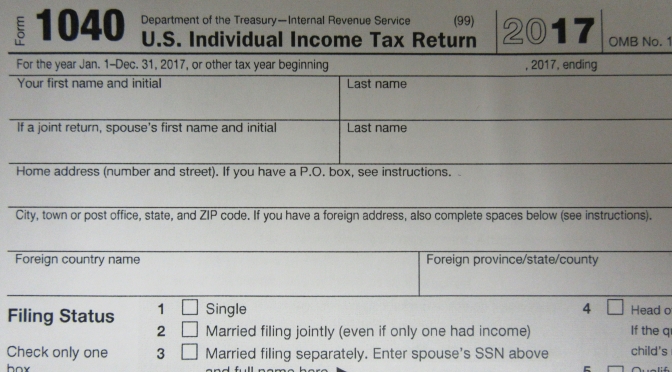 And thanks to more government regulations, some tax 1099 Forms that have a REMIC/WHFIT didn’t have to be mailed out until March 15. They don’t extend the tax deadline for the average Joe though. (Joe…though….see what I did there? Made a rhyme!! 😉 )

It’s not that I mind paying my fair share (another rhyme!) as long as the fair share is spent wisely.  But by the time the bureaucrats in government finish inflating the arm and leg paid in taxes, the fair share will only be enough for a government contractor to buy a hammer and box of nails!  Or maybe pay some healthy, able bodied man to stay home and draw housing, food stamps, Medicaid, welfare and a free cell phone each month while I work.  Whichever you prefer, Uncle Sam. You decide.Please don’t think me angry about the legal robbery, nicknamed taxation.  No, no, no!  It’s much more than anger! Road rage on steroids, really.

I’m bitter! Enraged, outraged, want to grab a 12 gauge!!  HA! Made another rhyme!  (And my first-grade teacher said I’d never amount to anything!!)

Trust me, thinking about tax returns is not a healthy state of mind. It’s like being in a prison cell between Hannibal Lecter and Charles Manson! 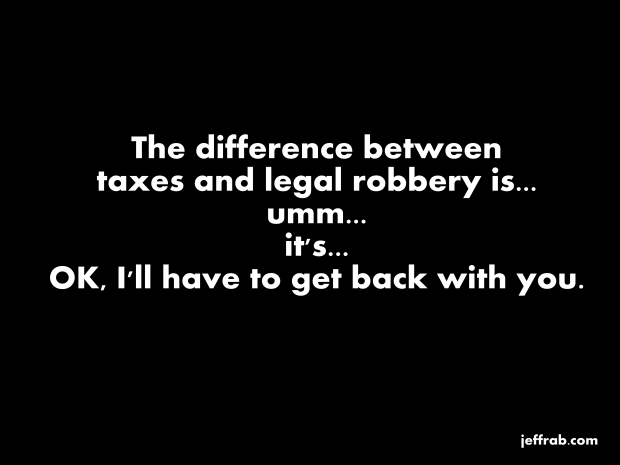 Even Dr. Seuss got it! I think it was Dr. Seuss, or somebody, who wrote about the tax man’s heart:

He put tax on ribbons, tax on tags.
Tax on packages, boxes and bags.

And he puzzled and puzzled, ’till his puzzler was sore.
Then the tax man’s thought, shot to his core.

And what happened then? Well in Jobville they say –
The tax man’s heart shrunk three sizes a day!

And then the true meaning of Tax Day came through,
As tax man found strength of ten Socialists, plus two!

Let me put it another way, like in an old, sneaky math word problem school teachers used to give on tests. (That was before you could use a calculator in elementary math class.)

So, the REAL question is — How can John and Jane afford to provide, feed, house, clothe, medicate and educate (BOOM! Another mind-blowing rhyme!) their family when they’re robbed by the government 114 days a year?

Well if I’m working for the government that much each year, then dog gone it, I want my government pension!

And by the way, the bonus question answer is — with all those taxes, baby’s parents can’t afford to buy baby shoes of any color!

Jesus even talked about taxes.  Jesus said, “Render therefore unto Caesar the things which are Caesar’s”.

Well I’m just glad Caesar was on the Italian government payroll!  Since I don’t live in Italy, I don’t have to pay those taxes!  In fact, I don’t even know anyone named Caesar around here, except the neighbor’s cat and salad!!

I can honestly say, however, I have never, ever cheated on my taxes, but I do understand the temptation.  In fact, tax returns and fishing trips produce more liars than just about anything else known to mankind! 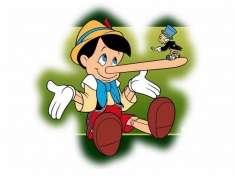 If people were like Pinocchio, how many people would trip over their nose after hitting the E-File button on Turbo Tax?  We’d have a national crisis of nose reduction surgeries and an oversupply of broom handles!

Plus, there’s always the fear factor of receiving a mailed notice from the IRS that you’re being audited. That’s stressful for sure!  Especially because that little thing we used to say about innocent until proven guilty isn’t so with the IRS.  With them, you’re guilty until proven more guilty!  They just assume you have bad intentions.

Yet I have neither good, nor bad, intentions in regard to taxes (said with a bright shining halo and angelic voice.)   Just pay what, and only what, you owe! 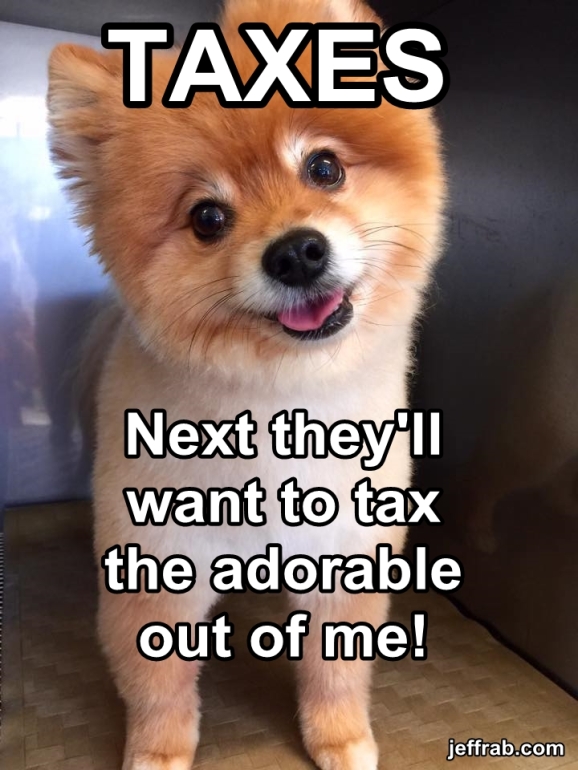 The government says you’re getting a great deal for the taxes you pay.  The reality is that it’s like going to an all you can eat buffet where they have all this food out for you to see, but the only thing you can actually reach and get is a glass of water (no ice) and toothpicks.  You spent a lot of money with nothing to show for your dough!  (Yes!! Another rhyme!)

Plus, it’s SO complicated if you have anything more than one W-2 Form!  It’s easier to get a hair out of a cold biscuit than itemize deductions!

It’s just, depressing.  I mean if I managed my money like the government does, I’d be standing on the bridge with Jimmy Stewart in It’s A Wonderful Life talking about jumping!

So as I prepare to hit the e-file button, it just feels right to tune the radio to the blues music. I don’t know. Maybe next year won’t be so bad.  Maybe I can get on the government pension for working 114 days this year for the government…