My first career was in public mental health, including the part where people are committed to state psychiatric hospitals.  I met a lot of super nice people during this time from law enforcement to medical personnel to social workers to the clients themselves.  Truly, everyone needs a little help from a friend at times.  That’s life.

Many I knew on a first name basis because they were in and out of the clinic, and most became friends on a professional basis.  Even when they were struggling, you couldn’t help but like them!  One was an older lady who was intelligent, charming and graceful.

She quit her meds though and shortly thereafter, her family brought her in.  It was bad enough she had to go to the state hospital for her own safety.

After she got out of the hospital, she was back to her charming self.

We always got along well, but after the commitment, she decided she didn’t like me anymore. Not one, single, BIT!

I walked through the lobby and she stopped me to let me have it with both barrels!  In the south we say, “She told me how the cow chews the corn!”

“Yes ma’am”, “Uh huh” and “I understand” were about all I could say.  I moved jobs to a nearby city and didn’t see her for quite a while….

….about 10 years later, in fact. I went into the grocery store at 10:00 one night get medicine for a sick child.  I stood in the long line just wanting to pay for the Children’s Tylenol and go.

I cringed when I realized she was directly in front of me.  She was by herself and wasn’t really talking to, but rather at, the lady in front of her about a National Enquirer title.

The lady was trying to politely rid herself of the unwanted conversation. I turned away pretending to look at something in the back of the store so she wouldn’t see me.

She looked at me and I felt her eyes burning into me like Superman’s laser vision!  After I could pretend no longer to be staring at something, I turned, nodded politely and looked up at the cashier.  Four people still ahead in line.

“IT’S YOUUUU!!” she snarled in a guttural voice, like she was about to say, “Get thee behind me, Satan!”

From there, she cranked up her volume from National Enquirer explanation to standing by the front speaker at a rock concert!

She squarely faced me and began yelling, “YOU!! YOU put me in Rusk State Hospital!! YOU said I was crazy!”

It had been so long, I was shocked she even remembered me. It felt oddly the same as in kindergarten when the teacher slapped my palm for writing with my left hand.

The store was quiet, but she got louder anyway.  There’s no doubt, way over in Aisle 6 near the honey buns and pudding pops, they could hear everything she said!

“I’ve never been crazy a day in my life! But you! YOU had me committed! You listened to my family and husband, not me!  I KNOW what’s going on with me! Not youuuu!”

She’s short. I’m 6’2”.  Yet she was drill sargenting me like a private first class recruit!  She got her face up as close to mine as she could and finished off the distance by pointing her bony finger in my face.

By now everyone in line, including the cashier, was staring at us.

I didn’t know what to say, so I shrugged and smiled. 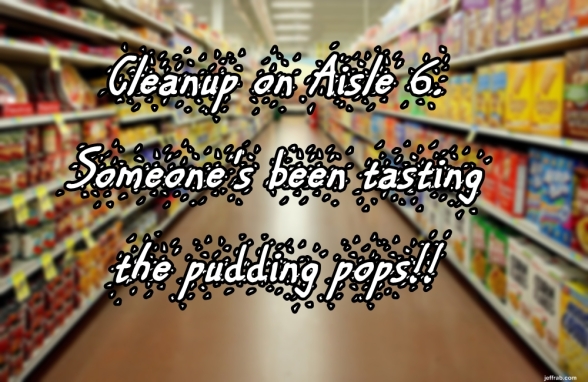 Which reminds me… Note To Self – Hey, Big Dummy!  If you’re in line in the future and someone you had a part of committing to an inpatient unit for a psychotic break is yelling at you in a grocery store line….Do. NOT. Smile!  P.S. And don’t forget the laundry soap next time either, baboon breath!)

When she finally finished yelling at me, there was one person left in front of her.

I bit my lip while she finally checked out.  She turned to the checkout lady, like nothing had just happened, smiled, and spoke to her in a strawberry shortcake sweet tone of voice!!

She decided to put the National Enquirer back on the shelf, and I gave her plenty of room carefully avoiding eye contact, and certainly, under any circumstances, smiling.

After she waddled out of the store, the checkout lady didn’t even look up and said, “You did the right thing! She’s still nuts!”

I haven’t thought about that incident for a long time until a couple of weeks ago when I saw the same lady in the same grocery store!!  I went the other way, straight to the check out line, and left!

On the way out the store I realized this time I had escaped!  A mental note came back, so now you can smile, Big Dummy!  But then, I realized I forgot the laundry soap…