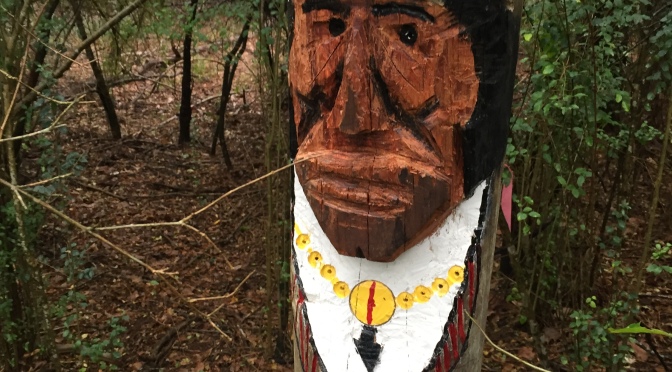 The little boogers were back in the woods behind our house.   7, 8 and 9 year old grandsons would never admit it, but their expressions said they almost got lost.

To implant a little raise the eyebrow caution in them, I whipped up a story of half-truth, half-lie, fabricated, made up, tall tale, umm, creative license story.

“Did y’all see any signs of Chief Katura in the woods?”

Like fishing for hungry perch with a worm, they snapped at the bait!

I paused to look them in the eye for emphasis.

They didn’t just take the bait.  They swallowed the hook!

I robbed some local fore from ghost stories from the town I grew up in and went on.

“You see, Chief Katura got really sick one day.  The medicine man told him he was on a fast track to the happy hunting ground.  Sure enough, he died a few days later.”

“Chief Katura had told his wife he wanted to be buried standing up, have his bow and arrow in his hand, and have a totem pole over the top of where he was buried.”

For dramatic effect, I took a deep breath, winced, then started stroking my goatee like I was deep in thought.

“I really shouldn’t be telling y’all this.” Shrugging my shoulders I said, “It’s probably not even true anyway.”

They started gulping at the fishing cork.

Like a politician trying to pass a lie detector test, I pretended to reluctantly answer, then threw it in overdrive and hit the gas!

“Well, the local folks say Chief Katura’s wife did bury him standing up, and even had a totem pole on top of him! But they say she was so mad at him for dying and leaving her alone, that she wouldn’t bury his bow and arrow with him. Ever since then, Chief Katura comes out at night, but only at night, to walk this whole area looking for his bow and arrow so his spirit can pass on to the happy hunting ground!”

Their mouths were open, eyes wide, faces half amazed, half terrified.

“They say on his totem pole, just before they buried him, the medicine man traced his hand and carved a perfect match of Chief Katura’s hand in the pole.  Now, only the bravest of the brave, a mighty powerful warrior, the only other warrior whose hand fits perfectly in the hand print can free the Chief from forever wandering the woods in search of his bow and arrow.”

Trying to sound nonchalant, as if only half interested, one of the grandsons stammered, “Well what does he look like?”

I hesitated. For good measure I winced again, like I was telling protected national security secrets.

All three nervously urged me on.

“Ok. Some people say he walks these woods dressed in his deer skin clothes, feathers and moccasins, but you can see right through him.  And at night, if you shine a flashlight on him, he just disappears, at least, until you turn off the flashlight, or worse yet…. it runs out of battery.”

Another chimed in, “I guess it’s like Santa! You have to believe to see him.”

“Yeah”, I looked at all three seriously, “but Santa’s made up.”

“Well some claim, not that I believe them you understand, but some claim Chief Katura caught some boys at night wandering in the woods. He thought the boys had hidden his bow and arrow, so he banished them into the middle of coyote packs until they told him where it was.  But not me! I just think it’s all a bunch of malarkey!”

One of the grandsons stuck out his chest. “I ain’t afraid of Chief Katura!”

An hour later, one of the other grandsons found me and confidentially said he had seen the totem pole in the woods! He was adamant the other two didn’t see it.

Of course, he couldn’t remember exactly where it was in the woods, so he couldn’t take me to it, but added, “Don’t tell them though because they’ll get scared!”

I knew instantly that the next time they came to visit PawPaw and JJ’s house, he would definitely see Chief Katura’s totem pole!

The next day I bought an eight-foot, 8-inch diameter fence post and chainsawed a face, decorations and an exact copy of my handprint into the totem pole.

It stands a couple of acres behind our house backed up to the woods, barely visible in the middle of a tall yaupon patch.  Invisible, that is, unless you’re quietly looking for Chief Katura!

When two of the grandsons returned, I refreshed their memory before they wandered outside.   Five minutes later one of them came running back into the house about to hyperventilate. “We found it! We found it!”

Trying to show no emotion, I looked up from the couch, “Found what?”

“Chief Katura’s totem pole!! It is like Santa! We didn’t see it cause we didn’t believe!”

Janet smiled and started out the back door so he could show JJ what they found.

Once there, they realized a handprint was in the totem pole.  Their hands didn’t fit, but they were even more convinced when my hand fit perfectly inside the carved out area!

“You’re the only one who can set Chief Katura free, PawPaw!”

“But I don’t feel brave”, I answered.

I did, however, feel like a big liar, but I got over it pretty quickly.

Anyway, we wandered the back woods a little and everything they saw from then on was a clue to the mystery, and certain proof that Chief Katura was wandering there in the woods the night before.

The next day, the third grandson and I went walking toward the back.  He was about 20 feet ahead of me when he spotted the totem pole inside the brush line and stopped in his tracks.

Without taking his eyes off of it, he didn’t get any closer, but walked 30 feet straight to the side before almost screaming, “HOLY COW!”

Now, there’s zero doubt in the minds of three little boys! Zilch! None!

To keep it going, I bought 50 cheap made in India arrowheads on Ebay.  When I know they’re coming, I’ll toss three or four around the totem pole area.

By finding arrowheads, Chief Katura was, and IS, very real indeed!

One day they’ll think back on all this and just shake their heads.  That’s when I’ll just blame it all on Janet!

Until then though, wherever they are at dusk, they’ll stop and listen to the coyote packs howling, and wonder if that was a boy hollering from the middle!