Some of the best characters are real live people….and so it was at lunch time. While eating lunch in a grocery store “deli”, an old gentleman was sitting at a table staring down the aisles. He looked tired, but content.

We exchanged head nods when I sat at the table near him, which in body language means, “I see you. I acknowledge you. I’m going sit here, but we won’t talk and ruin this quiet.”

Two minutes later, a heavy set man in his late 50’s walked by and spoke to the elderly gentleman who he obviously knew.

“Hey! You gettin’ yourself a lunch here?”

The old man responded, “No. My wife’s shopping so I’m waiting.”

Sugar – it’s worse than cocaine! The onward swooning of sugar’s allure is woefully tempting!  And the Christmas holidays are filled with every sort of the granulated, powdered, refined, and liquified versions of the cane plant.

Sure, I could lame blame it on something like my lack of self-control, but what fun is there in that?  Instead, I cast fault on everyone else’s need for an ever-growing fix of sugar.

Truth be told, the ideal world would have none of it. Instead, we’d just reach for a blueberry or celery stick, or maybe just suck on a prune for an hour or so for relief. (No prune relief pun intended).  END_OF_DOCUMENT_TOKEN_TO_BE_REPLACED

One of the things that used to just drive me crazy was telemarketers calling in the middle of a relaxed evening. Not anymore! Now, I LOVE telemarketers! One unsuspecting telemarketer can make the week!!

Telemarketers today are the old door to door salesmen of years gone by. And as for either one, it doesn’t matter what they are selling, soliciting or surveying, this dog ain’t biting that ham bone!

It’s probably not right, but my goal when telemarketers call and disturb a quiet, peaceful evening is to tie up as much of their time as humanly possible. Their uninvited call becomes my entertainment.

The key, and this is important, the key is to make a telemarketer think you are sincere, but not very smart.  I have a get out of jail free card on the not very smart part, but the sincere part has to be done in some other voice, like a backwards redneck with a severe southern drawl.

My telemarketer call record was a couple of 15-minute phone calls. My first 15-minute call I convinced the poor woman I’d taken pain medication, so I mumbled and acted confused the entire time. She kept asking if she could put me down for a donation to an environmental group, but I was able to turn the tables on her and started thanking her repeatedly for offering to help me financially. I just kept talking non-stop, in slurred speech, about how I was 83 years old, just had surgery, didn’t have any food and my great grandkids needed new shoes for school.

The more I talked, the more uncomfortable she got. She kept trying to interrupt and explain that she was asking for money, not giving it away. Every time she would start to say it I would just mumble over and over, “Oh tank ya, Jesus! Tank ya!” That was a fifteen minute call.

Last Spring a telemarketer number popped up on caller ID, so I used an idea I read about. Before they could say a word, I answered by half speaking, have secretly whispering, “John! I got rid of the body, but there’s blood everywhere!!”

There was nothing but silence on the other end.

Janet was sitting on the couch and looked at me mortified saying the police would be showing up any minute. They never came. I’m assuming the telemarketer was afraid because their number was on caller ID. (Said with an evil Dr. Jekyll laugh of, “Bru,who,hahahahaha!”)

END_OF_DOCUMENT_TOKEN_TO_BE_REPLACED 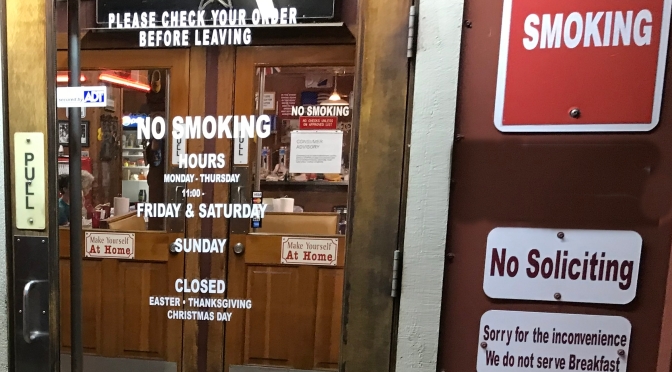 After my daughter’s out of town volleyball games, Janet and I look for out-of-the-way places to eat in rural East Texas. Sometimes though…

…sometimes, we should turn around. Like, what if the door doesn’t have a closing time? What kind of place closes just, whenever? It reminds me of the Hotel California — you can check out any time you like, but you can never leave.  Hint, hint, hint. There’s no closing time on the door. Yikes!

Inside we stood wondering what to do, but it was a country cafe so we seated ourselves.  We saw another couple we know from volleyball who had the same bright idea. We spoke and discovered they had been there a while but hadn’t ordered yet.  (There’s another clue.) END_OF_DOCUMENT_TOKEN_TO_BE_REPLACED

My daughters wanted a cat several years ago. I put my foot down. Absolutely not! No cat! Zero! Zilch! None! Ever!

They kept on. It was like verbal water boarding, so finally, I agreed to go look, but that’s all! Just look! Understand? No cat, period. Just looking!

We adopted Carl the next day.

END_OF_DOCUMENT_TOKEN_TO_BE_REPLACED

It’s pretty much the same every time. “Daddy, there’s a boy I want you to meet.  Can he come over?”  It starts with a 30 to 40 minute interrogation about who he is, who are his friends, where’s he go, how do you know him, what do his parents do, does he have a prison record, etc.  I usually get his height and weight too, just in case I have to dig a shallow grave in the woods.

If he makes it through that hurdle, then I’ll get, “Well, Daddy” – blink, blink and a puppy dog expression – “Can he come over?”   I put my hand on my forehead, not to be dramatic, but because a major headache is setting in, and I blurt out a foolish, half hearted, “Ahhhh!  Yeeeees. He can come over.”  And with that, another one of Beelzebub’s workers has an appointment to “hang out” with one of my daughters. END_OF_DOCUMENT_TOKEN_TO_BE_REPLACED

Mango, my black mouth curr dog, has a staring problem.  It’s hard to be stared at. It’s even worse when it’s a longer than average, full fledged, laser stare, the kind where every move you make is calculated and the pupils of the eyes follow you, anticipating every move you make. It gives a shiver down my spine!!  A stare like that from a person or stranger can start a fight, and one like that in a dark alley is why there are concealed handgun laws.

On the other hand, even if it’s a stare full of hope, love and adoration, after the initial amusement, it can get almost spooky, to the point you want to close the curtains and hide.

The best songs stay with you, or so they say.  Some stay with you so well they become Obsessive Compulsive Disorder!  They mesmerize, yet terrorize, at the same time.

It starts a never-ending one song play list between the ears that just won’t quit! END_OF_DOCUMENT_TOKEN_TO_BE_REPLACED