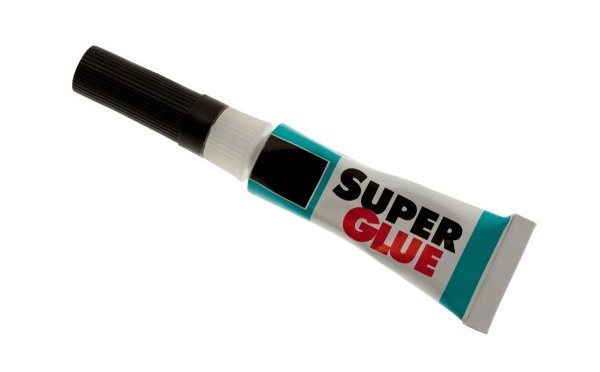 When my youngest son, Clark, was in high school, he got a gash in the top of his head from a basketball tournament.  Clark shaved part of his head so we could look closer.  Butterfly stitches wouldn’t stick, so I pinched the skin together while one of Clark’s friends dripped Super Glue on the cut.  Worked well too, a lot better than the first time….

….the first time Clark was 7 years old.  I coached his baseball team and was working with the outfielders to catch pop flies.  It almost dark and I told the boys no more but Clark begged for one more pop fly.  Since he was my son, I went against my better judgment and threw one more pop fly, high, really high.  Clark had perfect big leaguer form, stuck up his glove, and the ball hit him squarely in the mouth.

The week before he pulled his first front tooth and had big open gap when he smiled.  The ball smashed the open gap and pushed the next tooth through his upper lip.

Another player’s dad, a doctor, took a look. It needed a stitch, maybe two.  Off the record, he said if it was his son he would avoid the ER trauma and just super glue it together.

A man I know had ripped part of his ear off at home and super glued it back.  You couldn’t even see a scar, so I discussed options with Clark.  He did NOT want his lip stitched!  OK.

I pinched the cut together and Blake was to drop a single, that’s a solitary, solo, uno, one drop of super glue on the cut.

Clark was like a little man laying on his back completely trusting us to fix his cut.  I gently pinched the skin together.

It went well, until Blake’s part.  Blake lowered the tube a half inch from Clark’s lip and squeezed, hard.

Alright, it seems obvious now, but at the time it never occurred to me to practice beforehand. By the time I realized it, it was too late!

Blake squeezed half the tube!  Glue immediately ran down Clark’s lip and mouth.  Both of my fingers pinching the cut closed were now doused in super glue!

Blake did what any self respecting big brother would do. He burst into laughter! Not just just a little laugh, but a belly laugh, where tears come to your eyes.

Jared and Todd, the other two brothers, were innocent bystanders up to that point.  They immediately joined the hysterical laughter.

I already felt the glue sticking on my fingers. Not wanting both index fingers permanently glued to Clark’s upper lip like a human mustache, I pulled them off and ran to the bathroom. I grabbed the first thing I saw, toilet paper, and began wiping excess glue running down Clark’s face.

Laughter is contagious.  His brothers laughter caused Clark to laugh!

I started wiping up super glue with toilet paper from the bottom of Clark’s face up. By the time I got to his upper lip, it was dry!

The worst part, he was laughing so hard that the big smile crease you get between your mouth and cheek when you laugh had filled up with super glue and instantly bonded his mouth in a smile like pose.

Toilet paper left bits and pieces stuck to his face where I’d wiped his chin, cheek and neck.

Clark sat up and looked at us. His smile crease was glued together on half his face and bits of toilet paper were stuck all over him.

He looked a combination of the Grinch That Stole Christmas after he tried to shave his face and had paper stuck all over his face, and the Joker from Batman, except only one side of his face was smiling.

His brothers had no sympathy. None!  They took one look and began rolling on the floor laughing.

Clark looked in the mirror and asked if I could fix his face, which made his brothers laugh even harder!

Plus, it was hard to understand Clark with the corner of his mouth glued to the inside of his cheek.  He couldn’t really move the right side of his face at all.  Poor boy looked like a seven year old stroke victim!

I checked the cut on his upper lip and super glue had completely covered it with a hard, cocoon of protection, so it worked, I guess.

If he could’ve stayed locked in the attic a few days, it would’ve been fine, but I coached his soccer team too.  The next day at soccer practice, Clark was running around normally, but to any passerby it looked like Clark had some freakish deformation with a half smile etched in his face. I just pretended it was normal.

When the boys on his team asked what happened, Clark pointed, “My Dad did this!”

The mothers shook their heads in pity for Clark and looked at me like a brute gorilla. One dad, however, secretly gave me a thumbs up saying, “Well at least you tried to save some money!”

Thankfully it didn’t bother Clark, even though for several days, at any given time, one of his brothers would look at him and burst into laughter.  By the fourth day, the super glue began to wear off and Clark’s stroke like appearance turned back to normal.

His lip healed nicely, and just like the guy who super glued his ear back on, didn’t even scar….

….so the top of his head was a piece of cake!

You may think super gluing a wound is a BAD idea, or maybe thinking, I’m gonna try that next time!

It worked! Just remember, one drop, just ONE drop at a time!