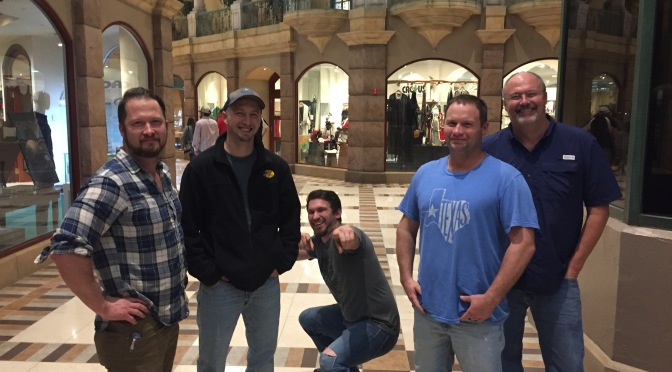 “I think this trip is worthy of one of those Facebook story thingies you do!” one of my sons, Kyle said.  He’s technically a son-in-law, but more so, a son.

Another son, Todd, immediately added, “Yeah, I’m going to read one of your Facebook thingies at your funeral!”

Love was in the air.

My oldest son, Blake, was driving their family mini-van, and my other four sons were piled in seats behind us.

I didn’t know where we were going. In a group text, they asked if I wanted to do something, and then they all quickly chimed in that they were all “in”.

Experience told me to be cautious, especially with their secrecy.  Usually their schemes involve something dangerous, humiliating or involving a wild animal.

Not this time. We were already driving 1 ½ hours to Shreveport, Louisiana when they told me they were taking me to a casino.

I rolled my eyes.

I really don’t gamble.  Money equals time worked, and I try not to throw time away.

Once, years ago, I put a quarter in a slot machine and pulled the lever just to say I’d done it. I lost that quarter. I’ve missed it ever since.

On the other hand, I’ve lost money on “risky” companies in the stock market.  At least theoretically there’s a chance in that, as opposed to an acre of the moon I considered buying on line at Christmas for $79. (No joke! You can buy moon land on the internet!)

At least this trip wasn’t dangerous, humiliating and no wild animal was involved, so I took a deep breath, leaned back in the passenger seat, and listened.

They talked from the back seats about how roomy the mini-van was, then started pushing all the buttons to find out what they did. They asked Blake if he could change the color of the neon strip lights in the van ceiling with an after-market light kit.

Blake glanced in the rearview mirror at the adult testosterone zoo behind him and shook his head like he was having second thoughts about driving the imbeciles anywhere.

They began moving from subject to subject, insult to insult, with a seemingly rotating spotlight on one person while the others ganged up on him. Once it became boring, the spotlight rotated to the next one. No one was immune.

When they insinuated that one of them was getting fat, he became a tad defensive.

That was a mistake, about like a swimming with sharks when throwing out blood bait mistake.

“No, I’m not!” he adamantly objected.  “I weigh the same I did three years ago!”

Mocking laughter, a “Psft”, and “Whatever!” were the responses.

Jared, another son said, “No! Last week we weighed at my house, and you weighed 15 pounds more than you used to!”

As if the juror returned a guilty verdict in a fast trial, they all laughed, all except the one shaking his head no. His normal confidence had a chink in the armor, so they knew they had gotten to him.  Mission accomplished.

The spotlight quickly turned. Now another son was being accused of not being tech savvy. That didn’t get far, and the conversation shifted to watching Youtube videos while sitting on the commode. (You can’t make this stuff up!)

Todd proclaimed that it’s a well-known fact that he doesn’t answer calls or texts while on the pot because it interferes with his Youtube time!

Clark chimed in, “I can’t go to the bathroom without my phone! A couple of months ago, I broke my phone for a week. I was constipated the whole time!”

Jared was the lucky one! He just reached up and turned off his cochlear implant. He can’t hear a thing without it and just went to sleep! Lucky dog!

When we got to the casino, they handed me $50 they had all chipped in on. I was told to either come back rich, or without the $50, whichever way it went. I put it my shirt pocket.

Each announced his “budget” and all agreed they wouldn’t spend more than the most, which was the $50.

To humor them, I tried to get my quarter back from years ago, but reached for my own wallet to do it.

I won $10 on a quarter slot machine, then walked away and watched people putting dollar after dollar in slot machines, blackjack tables and roulette wheels.

Several of my sons were on quarter slot machines, so I messed around beside them until I was back even.

Big dummy! I should’ve stopped a quarter ahead to win back the one I lost years ago!

I looked up and the guys were gone.  Ten minutes later I found all five standing around an electronic roulette wheel. They took turns betting, not on numbers, but colors, red or black.

Blake lost a round and broke even, so he quit.

Jared, Todd, Clark, and Kyle were ahead, and I handed the $50 back to them. They pooled some money in a “group bet” and guessed right on red and black several times in a row. They were up almost $200.

Todd was sitting at the table betting for them all when Clark warned, “We need to just walk away ahead, right now!”  Jared and Kyle immediately agreed.

Blake, who had no dog in the hunt, urgently said, “Red Todd! Put it all on red!”

In unison a “NOOOOO!” went up from the other three. Too late! The timer closed.

They were all in on RED.

The made in China roulette marble dropped and rolled around and round. The wheel seemed to spin in slow motion before decisively dropping on….

Four loud moans echoed like a herd of cows at feeding time! The only laughter was Blake hysterically slapping his knee at their misfortune.

That was it. We left and cashed out our tickets. 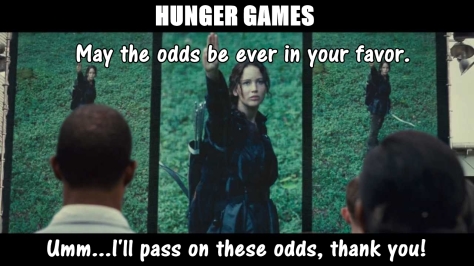 Half the ride home was a conversation about texts Kyle and Jared sent their wives. Shawnna and Veronica were together, so the guys made a side bet about which one would “crack” first.

Jared and Kyle both claimed in a text that the other had lost about $100 or so, but each warned his wife not to tell the other one there with them! The winner was going to be whoever got a call or text first from his respective wife about losing money, which would mean the other one told.

Both basically texted back saying it’s none of your business, just worry about yourself!

That’s my girls! You go, daughters! You go!

The other half of the ride home was the backseat brothers blaming Blake for losing money as a group, especially once they realized Blake didn’t even have money in the group bet.

From behind the mini-van steering wheel, Blake barked back at the insurgents. “Hey, I didn’t push the button! Todd did! I didn’t make him do it! And if y’all had won, y’all’d all be thankin’ me about now!!”

Once again, nothing but mocking laughter, a “Psft”, and a “Whatever!” response.

We made it home without incident, and here’s a “little Facebook story thingy” to set the basic facts straight. Any remaining facts however, are open to change, exaggeration, or complete fabrication by my sons just as convincedly as professional politicians running for office!

And Todd, don’t read this one at my funeral!